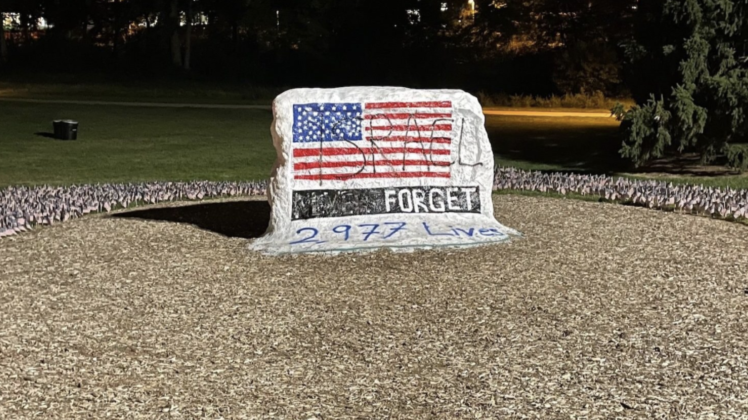 YAF RELEASE: A 9/11 memorial was vandalized late Friday night, just hours before 9/11 remembrance ceremonies are scheduled to take place across the country.

The memorial was a part of Young America’s Foundation’s 9/11: Never Forget Project, in which more than 200 schools across the country have each planted 2,977 flags to honor those murdered on September 11, 2001 by radical Islamic terrorists. To date, more than 12 million flags have been planted.

Michigan State’s flag display and 9/11 memorial were vandalized with graffiti ahead of the 20th anniversary of 9/11. The word “Never” was covered with black spray paint, making the display read “Forget.” The word “Israel” was painted across the American flag.

“It’s stunning that someone would vandalize a memorial to the victims of the September 11th attacks, but it also underscores why we do this every year—to ensure that the innocent lives taken that day are never forgotten,” said MSU YAF Chairman Charlie Jones.

MSU is one of more than 200 schools participating in the 9/11: Never Forget Project, the largest nationwide student activism project. Read the full story at Young America’s Foundation.