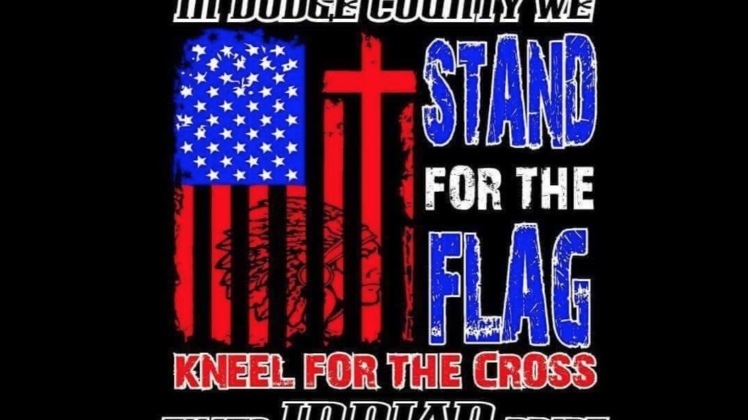 Folks who live in Dodge County, Georgia stand for the national anthem and they take a knee to pray. That’s just how it is.

So when the Dodge County High School cheerleaders started selling t-shirts that read, “In Dodge County, we stand for the flag, kneel for the cross,” nobody thought it would cause a controversy.

“This shirt is not only one-sided but offensive,” she wrote. “I can’t imagine how our children would feel entering a place that is supposed to be welcoming and accepting of students from all walks of life, beliefs, and perspectives – but instead, they are faced with this type of exclusionary message.”

Proceeds from the patriotic shirts were going to help fund cheerleading competitions. But that did not seem to satisfy the school board member’s anger.

Ikedionwu wrote that she personally contacted school system administrators to voice her concerns.

“At this point, the shirt will no longer be sold,” she declared.

But that’s when local residents and businesses got involved and decided to sell the t-shirts off campus.

“I’m standing because it has the United States flag on it and the cross. Those are two things I will back any day of the week,” said Nikki Mullis, the manager of White Hat Auto in Eastland.

Ms. Mullis tells the Todd Starnes Radio Show that people are calling to purchase shirts from across the world. On Thursday they shipped three shirts to Afghanistan.

“This ain’t just Georgia anymore,” she said. “We are a community that when something happens we are all together.”

Credit manager Amanda Parker tells me never in a million years would she have thought there would be a controversy over Old Glory and the Lord.

“We are just a small town in Eastman, Georgia and we’re standing up for our Christian faith and what we believe in,” she said.

But there are some critics of the shirt.

“It stands for the hurt of black people getting killed, beat by police officers and getting off with it,” one resident told television station WMAZ. “So therefore, we as black people, some of us have taken that, to us, that’s what it looks like.”

To be clear, there is nothing on the shirt that comes even close to promoting police brutality.

Click here to purchase a shirt. All proceeds go to the high school cheerleading squad.