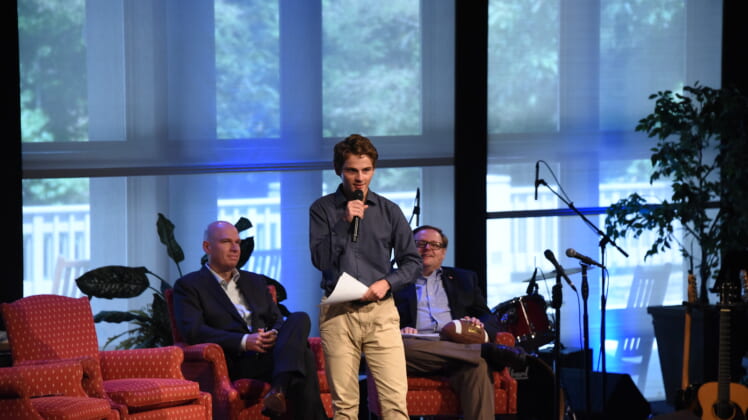 Four months after being told that he couldn’t give his valedictory address because it referenced Christ, an Illinois teenager who graduated at the top of his class at West Prairie High School was finally able to deliver his speech.

But instead of delivering his graduation speech in his hometown, Sam Blackledge shared his remarks at the Todd Starnes Fall Getaway at the Billy Graham Training Center in North Carolina.

Several hundred guests gave the young man from Illinois a standing ovation — including Sam’s parents who were special guests for the weekend gathering.

Blackledge’s address was a message about love and forgiveness, an irony that was all but lost on school administrators.

“Christ came to show us God’s justice in dealing with the unfairness of the world,” Blackledge said in his speech. “The cross demonstrates to us the very love of God who died in our place and how we find at the end of the day that without his forgiveness we would never make it.”

It was this paragraph and the preceding one that transported the listener to Calvary, that got the high school graduate in trouble.

Told that he needed to remove the paragraphs or he wouldn’t be allowed to deliver the speech, Blackledge faced a difficult choice.

At the Todd Starnes Fall Getaway, he said that out of respect for the authority of the school officials, he would not give the speech. But he asked for a brief moment to say a few words as his mother was in the audience expecting the speech.

It was that respect that led the young man to give a brief thanks and not make a statement of defiance and deliver the speech anyways.

But to prevent this from happening again, the Blackledge’s enlisted the help of First Liberty Institute, one of the nation’s top law firms handling religious liberty cases.

First Liberty attorney Jeremy Dys said that the West Prairie school district should go back to the Department of Education website and see the policy that is in place that forbids exactly what happened to Blackledge.

“Sam worked for for years to get to the top of his class,” Dys said.

Now a freshman at Grand Canyon University, Blackledge is studying microbiology and Spanish.