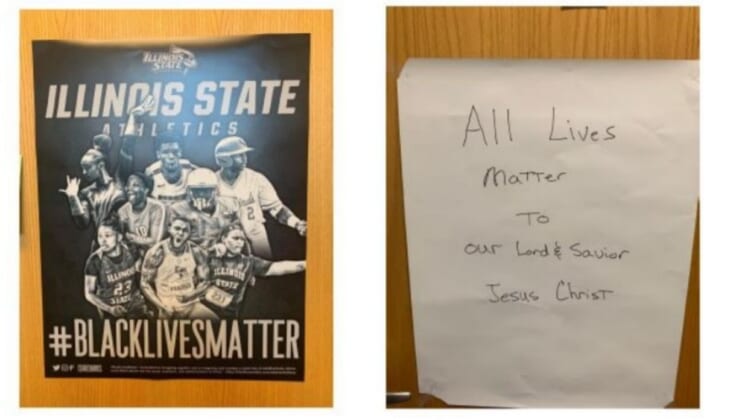 An assistant college football coach claims he was fired for replacing a Black Lives Matter poster with an “All Lives Matter” to Jesus sign outside his office door.

Beathard claims he was terminated from his position as ISU’s offensive coordinator Sept. 2, 2020 after he removed a Black Lives Matter poster from his office door and replaced it with his own message: “All Lives Matter to Our Lord and Savior Jesus Christ.”

The public university allegedly put up the BLM posters while Beathard was on leave following the death of his wife who had breast cancer, according to the lawsuit. Beathard said he is opposed to the organization because of its “Marxist” ties and support for violence and destruction of property.

The lawsuit claims Beathard was told he was fired because the head coach didn’t like the direction of the offense, but Beathard set several records and the team achieved national ranking with his offense in 2014 and 2015 and again in 2018 and 2019.

“They were literally trying to force an orthodoxy on us,” he said. “I’ve successfully coached young men of all races, and I believe black lives matter. But I do not support the organization.”

The coach’s attorney, Doug Churdar, said the only reason Beathard isn’t offensive coordinator anymore is because “he did not toe the party line on BLM.”

“It’s come to this,” Churdar said. “If you put the government’s message on your door, you keep
your job. If you replace it with your own message, you’re fired.”

The coach is part of a football family.

“He is the son of legendary NFL general manager Bobby Beathard and the uncle of San Francisco 49ers quarterback C.J. Beathard,” the Washington Post reported.