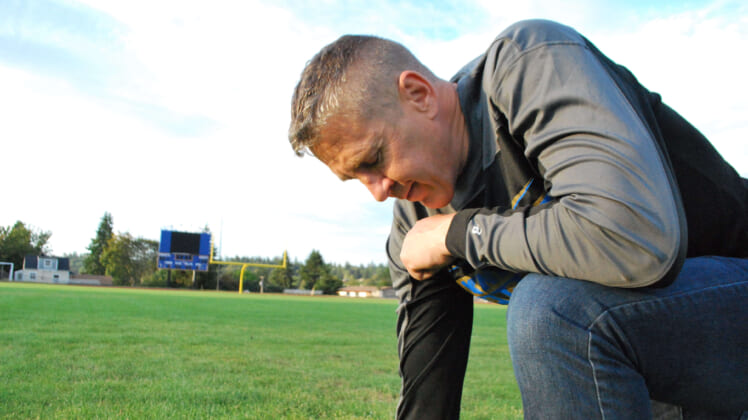 A Christian football coach is his second round before the Ninth Circuit to find out if coaches or any other public employees or government workers, are allowed to pray in public.

Coach Joe Kennedy, a Marine veteran and a former assistant football coach at Bremerton High School, was fired in 2015 after he declined to stop praying on the 50-yard-line after games.

His case is once again being heard after the Supreme Court handed it back down in 2019 with a request for more information.

Mike Berry, an attorney at First Liberty Institute, who represents the coach, said the law, the Constitution, and the facts are all on his side. They just need the judges.

“Literally what’s at stake is any public school employee or any government employee, whether you’re a post office worker, you work at the Driver’s License office, a school teacher, a football coach, and it’s whether you have the right to live out your faith even when you’re on the job or on the clock, or as the Ninth Circuit said the last time we were in front of them, the government can actually force you out of your job for doing anything that is an expression of your religion that other people perceive,” Berry told the “Todd Starnes Show.”

“So that could be as simple as a teacher wearing a Yamaka when they’re in the school cafeteria eating lunch or maybe a teacher crossing themselves and bowing to pray in the cafeteria,” he added. “Those types of public demonstrations of faith that we’re all familiar with in everyday life, according to the Ninth Circuit, those are now forbidden and you can lose your job for that.”

Stay tuned for any updates on the story as the case is in oral arguments before the Ninth Circuit Court of Appeals.