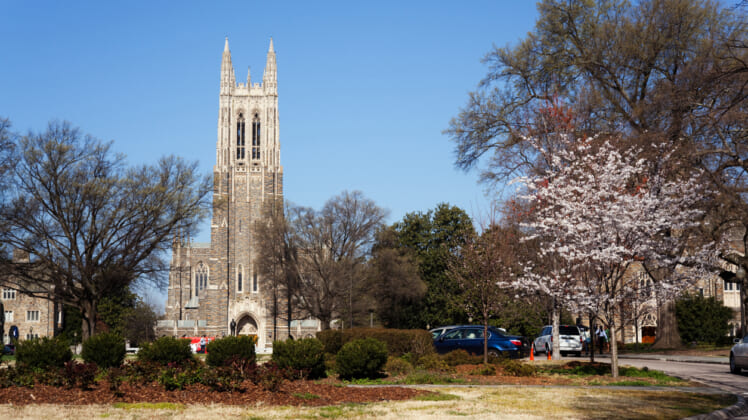 Durham, USA – March 18, 2011: Duke University Chapel and it’s imposing bell tower in the morning with few undergraduate students walking to class at another part of the campus on one of the warmer days of spring.

The student government association at Duke University voted unanimously not to formally recognize Young Life, one of the nation’s most prominent Christian student organizations.

Tony Perkins, president of Family Research Council (FRC), pointed out the irony during an interview on The Todd Starnes Radio Show. Duke University was founded as a Methodist school.

“In fact, their motto, which still appears on some of the buildings there on the campus, is ‘education and religion,’” said Perkins. “Young Life said, ‘Look, anybody can join and come to our events, but we hold our leaders to a standard of sexual morality in line with scripture’ and the student government there said, ‘No, that violates the discrimination policy of the university and therefore we’re not going to recognize you.’”

“There is this effort to push religion out of the public square, to silence Christians, and this is a perfect example,” continued Perkins, host of the “Washington Watch” radio program. “An institution founded as a religious university now saying that a group that adheres to a Biblical standard of sexual morality is not welcome.”

Some people may think things are fine today because President Trump is in the White House, but Starnes pointed out this is another reminder that religious liberty is under attack.

“I think it’s intensified because the president and the people he put in place are actually standing up to the left for the first time and pushing back and saying, ‘Wait a minute, people have Constitutional rights,’” answered Perkins. “That’s made the left, who are quite frankly unaccustomed to having Republicans push back against them with any real force, are enraged and so I think they are fighting intently to stop the momentum that this administration has created simply by standing up.”