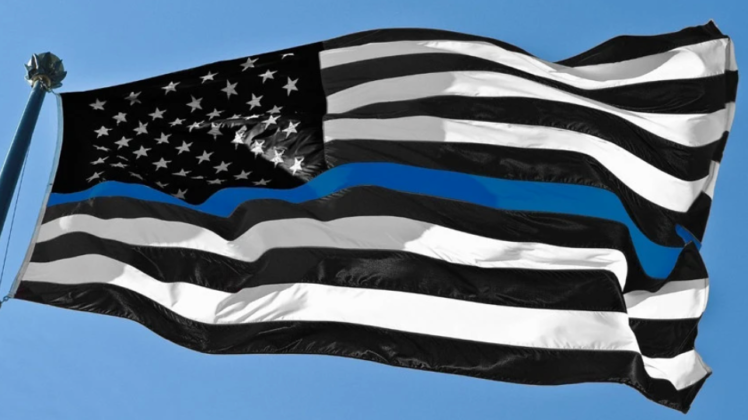 A Florida high school will no longer allow the teenage son of a fallen police officer to honor his memory by bringing the “Thin Blue Line” flag onto the football field.

Leaders at Fletcher High School in Neptune Beach say the flag has become a controversial symbol and some people considered the flag to be racist.

“The flag, which is known as the Thin Blue Line flag, has different meaning for different people, and rather than representing the young man’s personal feelings, it was being interpreted as a political statement of the team and of the school,” principal Dean Ledford said in a statement.

“In consultation with the coaches, I determined that the act of using this flag in this personal way, while in the context of the football game opening ceremony, could easily be construed as representing a political position of our school and not just the personal feelings of the student and his teammates,” the principal added. “Therefore, I have determined that it is no longer appropriate to continue.”

The Fletcher Senators had been running onto the field with the flag for 11 games in the 2019 season.

Online posters accused the team of being racist for waving the flag while running onto the field before games, News4Jax.com reported.

One post read: “…Fletcher really out here being openly racist…”

“It is all about my son’s love for his dad and his memory,” said Lorie Lavender, whose son, Caelen, started the ritual.

She said her son, a junior offensive lineman, started running with the flag in honor of his late father, Cpl. Andy Lavender. He was a Jacksonville Beach police officer and active in sports programs. He passed away unexpectedly in August 2019 after 29 years in law enforcement.

“He was one of a kind,” Lorie Lavender said. “And he is very much missed and loved.”

“This is a prime example where it was as innocent as can be, there is no politics involved, no us versus them, simply to honor a great man and allow his kids in the football team to honor him, and they have taken those, hijacked it and called it racism,” president Steve Zona told News4Jax. “And now the son and these kids are suffering because of it.”