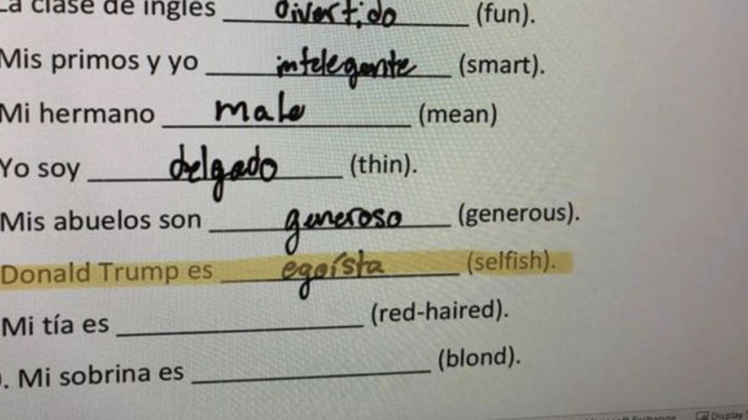 We have dedicated a good amount of time on the Todd Starnes Radio Show to uncovering and exposing anti-Trump hatred in American public school classrooms.

As I wrote in my book, “Culture Jihad: How to Stop the Left From Killing a Nation,” if we don’t get a handle on this clear and present danger, we could lose the country.

Many of our taxpayer-funded schools are nothing more than indoctrination camps for leftist ideology.

Students were required to complete a lesson that included fill-in-the-blank questions.

One answer described President Donald Trump as being selfish, according to a Facebook post shared by a parent.

Not only was the question inappropriate, it was downright false. President Trump is one of the most generous leaders in American history.

A quick Google search would’ve revealed that he’s not even taking a salary. Does that sound selfish to you?

The district said it became aware of the issue Wednesday, WHIO reported.

“The teacher issued a public apology to her students and explained why the statement, although not meant to offend, but generate discussion and a reaction from the students, was wrong,” the district said in a statement. “The West Liberty-Salem Schools want to be very clear that we do not condone, support or endorse the statements made in this assignment.”

I don’t doubt the school’s statement, but I do doubt the sincerity of the teacher. She should’ve been told to pack her bags. Adios.