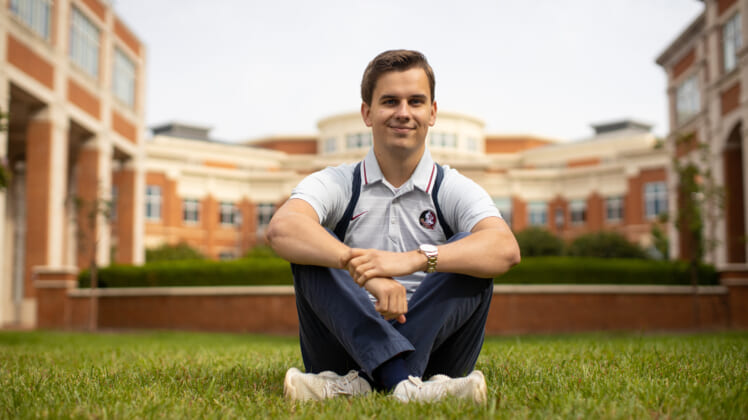 A federal court issued an order Friday that requires Florida State University to resume paying student Jack Denton his salary after unconstitutionally removing him from his position as student senate president for sharing his personal religious beliefs in private text conversations with other students. The court explained in its partial preliminary injunction against the university that “those participating in the political process do not forfeit their First Amendment Freedoms.”

“All students should be able to peacefully share their personal convictions without fear of retaliation,” said Alliance Defending Freedom Senior Counsel Tyson Langhofer, director of the ADF Center for Academic Freedom, who argued before the court on behalf of Denton on Sept. 29. “As the court found, FSU violated Jack’s constitutionally protected freedom of speech and therefore cannot withhold his salary from him in his role as student senate president. We look forward to a final resolution for Jack.”

“It is no answer to say, as FSU does, that this is merely all part of the ‘rough and tumble’ of student politics, that Denton must develop thicker skin…,” the U.S. District Court for the Northern District of Florida, Tallahassee Division, wrote in its order in Denton v. Thrasher. “Denton is not here to complain about insults or hurt feelings. His claim is that he lost his job—his student government position—because he chose to exercise his First Amendment rights…. [T]hose participating in the political process do not forfeit their First Amendment Freedoms.”

“The university administrator defendants are enjoined from continuing to enforce or give effect to the vote to remove Jack Denton to the extent that doing so means denying prospective payment for services as student senate president,” the court wrote.

On behalf of Denton, ADF attorneys filed suit against FSU administrators and student senate officials after they repeatedly and unconstitutionally retaliated against him for sharing his personal religious beliefs with other students.

In a June 3 private text conversation with fellow Catholic students, Denton suggested that BlackLivesMatter.com, Reclaim the Block, and the ACLU advocate for causes opposed to Catholic teaching, so Catholic students may wish to avoid supporting them financially. After one student took screenshots of Denton’s private messages and shared them publicly on social media, students mocked and misrepresented his remarks and demanded his removal from leadership as the SGA’s student senate president. After a failed vote of no-confidence on June 3, student senators approved Denton’s removal two days later. Students who supported the motion stated that they sought to remove Denton because of his beliefs, as communicated in the private texts.

“Florida State should be fostering real diversity of thought, not punishing individuals based on their religious convictions or political beliefs,” Langhofer said. “While FSU students claim they’re creating a ‘safe space,’ they’ve tried to cancel Jack’s freedoms and discriminate against him because they don’t like his beliefs, in direct violation of the school’s SGA Ethics Code, the Student Body Constitution, and—most importantly—the First Amendment.”