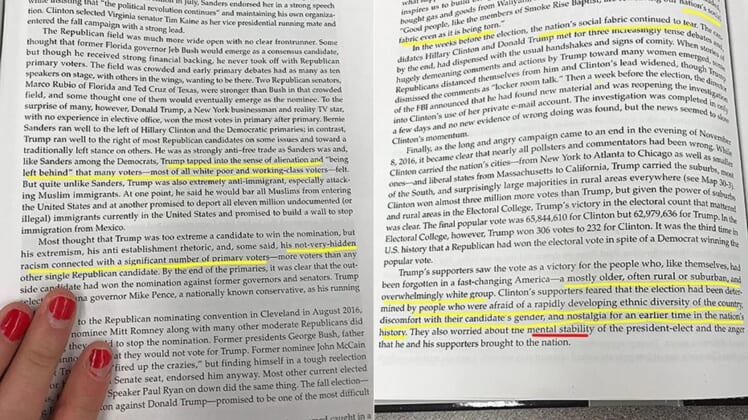 I came across this item as I was researching my new book, “Culture Jihad: How to Stop the Left From Killing a Nation.”

Many Advanced Placement students across the fruited plain will be using an American History textbook that depicts President Trump as mentally ill and his supporters as racists.

The textbook, published by Pearson Education, is titled, “By the People: A History of the United States.” It was first exposed by radio host Alex Clark in 2018.

And here’s just a glimpse at the Mainstream Media coverage back in 2018:

The final section of the book, titled, “The Angry Election of 2016” is especially critical of the president.

“Most thought that Trump was too extreme a candidate to win the nomination, but his extremism, his anti-establishment rhetoric, and, some said, his not very hidden racism connected with a significant number of primary voters,” the author wrote.

FIGHT BACK AGAINST THE LEFTISTS: CLICK HERE TO PRE-ORDER A COPY OF TODD’S NEW BOOK – CULTURE JIHAD.

The author goes on to describe the president’s supporters as “mostly older, often rural or suburban, and overwhelmingly white.”

“Clinton’s supporters feared that the election had been determined by people who were afraid of a rapidly developing ethnic diversity of the country, discomfort with their candidate’s gender and nostalgia for an earlier time in the nation’s history,” the textbook reads. “They also worried about the mental stability of the president-elect and the anger that he and his supporters brought to the nation.”

In other words, Advanced Placement students are going to be taught that President Trump is mentally insane and his supporters are a bunch of irredeemable deplorables. Such descriptions would be laughable, but this garbage is being shoved into the minds of impressionable American teenagers.

Tarra Snyder, a student at Rosemount High School in Minnesota, told Fox News she was “appalled” after seeing how “blatantly biased” the textbook was toward Trump and his voters. She said it also glossed over all issues then-Democratic presidential candidate Hillary Clinton faced during her campaign.

“It was really, really surprising to me,” she said. “I really believe that learning should be objective and that students can make their own decisions based on what they’re able to learn in a classroom, and if the facts are skewed then students aren’t able to make well-rounded decisions on what they believe.”

A Pearson spokesperson defended the textbook pointing out the book underwent “rigorous peer review to ensure academic integrity.”
“This work is designed to convey college-level information to high school students and meet specific Advanced Placement standards. It aims to promote debate and critical thinking by presenting multiple sides of historical issues and offering a broad survey of arguments from the 2016 presidential election and other recent topics. We have reviewed the passages in question independently and in the context of the rest of the book. This review has confirmed that the text offers a broad view of critical arguments from both sides of the 2016 presidential election,” the statement read.
Joy Pullman, writing for The Federalist, noted the dangers of such textbooks being used in public school classrooms.
“Let’s be clear: This is overt political propaganda being scooped into the most capable students’s minds under the guise of education. Even if they don’t accept its messages entirely, studying this wastes time that young people deserve to be spending getting actually educated,” she wrote.

Ronald Reagan once said that “our most precious resources, our greatest hope for the future, are the minds and hearts of our people, especially our children.”

And yet we have entrusted our most precious resources to a bunch of degenerate propagandists who hate everything about the land of the free and the home of the brave.

In his 1989 farewell address, Reagan warned the nation about what was to come.

“An informed patriotism is what we want,” he said. “And are we doing a good enough job teaching our children when America is and what she represents in the long history of the world?

I write extensively of the efforts to destroy American culture in my upcoming book, “Culture Jihad.” I urge you to pre-order a copy so you can prepare for what the Left is doing to our great nation. Click here.