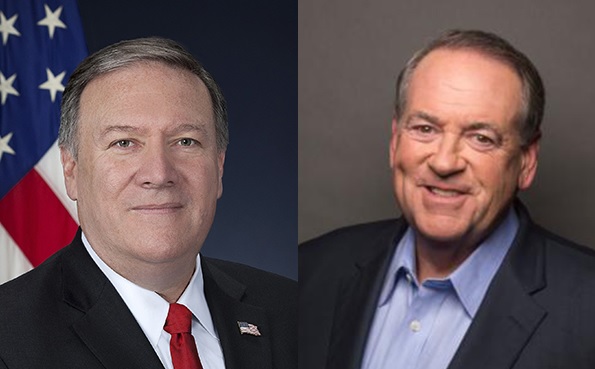 Scott Lamb and Ryan Halfenbein of the Standing for Freedom Center made the big announcement Thursday on the Todd Starnes Radio Show.

“One of the big announcements to come out of this week is the new senior advisor to the center is former Secretary of State Mike Pompeo,” said Halfenbein.

Lamb went on to discuss the new cast of people joining the Standing for Freedom Center and referred to them as “a great cast of characters, both men and women.”

Pompeo pushed for religious liberty on an international level under the Trump administration and Huckabee, who hosts a show on TBN, regularly discusses faith and politics.

The other members joining include pro-life advocate Abby Johnson, who is working on her doctorate, as well as Be David and Jason Benham, brothers who are alumni of Liberty University, and are well-known entrepreneurs in real estate.

According to Lamb, all the members are excited to be working together and defend the founding principles of America.

“This is pretty exciting news,” said Host Todd Starnes after Lamb and Halfenbein discussed the new members and what the center stands for.

The Standing for Freedom Center’s purpose on their website states:

“The Standing For Freedom Center exists to uphold the Christian faith and defend America’s Constitution. We honor human dignity, individual liberty, limited government, and free markets. The Center serves to inform all Americans in matters of faith and liberty, and then deploy these faithful men and women across every medium and platform to protect and defend our strongest-held beliefs in every facet of society.”

To find out more about the Standing for Freedom Center go to https://www.standingforfreedom.com.

LISTEN TO THE FULL INTERVIEW BEGINNING AT 31:40 ON THE PODCAST: