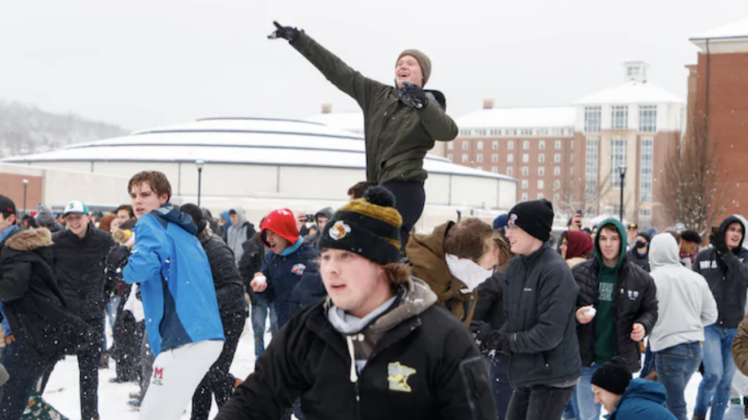 The Great Liberty University Snowball Fight of 2021 has drawn the wrath of health department workers, members of the mainstream media and a bunch of rabble rousing millennial snowflakes.

More than 3,000 students emerged from their dorm rooms to enjoy the aftermath of a rare Southern snowstorm. They built snowmen, set world records in sledding and engaged in the mother of all snowball fights.

In other words, they behaved as any other red-blooded American young people would behave — they had fun.

Unfortunately, the Cancel Culture crowd is easily triggered by mirth and merriment. And when photos emerged of the youngsters hugging and smiling and laughing with nary a mask in sight, all you-know-what broke loose.

Faster than you could say Frosty the Snowman, local residents fired off complaints to the health department — fearing the snowball fight could lead to a global pandemic.

The News & Advance reports more than 100 complaints were filed with many demanding that the Christian university face some sort of punishment.

“Being in a crowd of hundreds, standing shoulder to shoulder, is not acceptable behavior,” one anonymous complainant wrote Monday. “The school should face consequences for encouraging this behavior.”

Dr. Jerry Prevo, the university’s interim president and one of the most decent human beings on the planet, was terribly concerned that the snowball fight had caused such grief.

“Having lived in Alaska for the past fifty years, I own a lifetime of memories of joy spent in outdoor winter fun with friends,” Dr. Prevo wrote on Facebook. “Lynchburg hasn’t seen a good snow in over two years and much of our student body comes from areas of the country that never see snow at all.”

“I messed up. We did not think through or communicate the need to wear facial coverings and remain 6 feet apart in compliance with Virginia Governor’s Executive Orders for the suppression of the spread of COVID-19 or even our own COVID-19 Operations Plan. And the size of the group was not in compliance either,” he wrote.

Dr. Prevo, in the spirit of Christian love, offered a sincere apology to the offended masses.

“We want our community to know that Sunday’s snowball event was not done with a heart of defiance,” he wrote. “The mistake was one of being caught up in the moment of the day. I and my leadership team apologize for not leading our students to abide by COVID-19 protocols during this event.”

What a good and decent man.

“I am truly sorry for how this activity may put our students and university in a negative light, potentially diminishing the hard work of many dedicated employees and volunteers,” he said.

If anything, Liberty University has received an avalanche of support from around the nation – especially from Americans who have grown weary of the crackdown on civil liberties.

And yes, I believe those of us in the Southern states have a God-given right to enjoy a snowball fight once in a blue moon.

Unfortunately, the China Virus Police disagree. And so do all those leftists lurking on social media hoping to expose and shame Christian kids frolicking in the snow.

The Great Liberty University Snowball Fight of 2021 has proven that liberals have put fun on ice.

Note: Liberty University is a longtime sponsor of The Todd Starnes Show and I fully endorse their mission and their snowball fight.