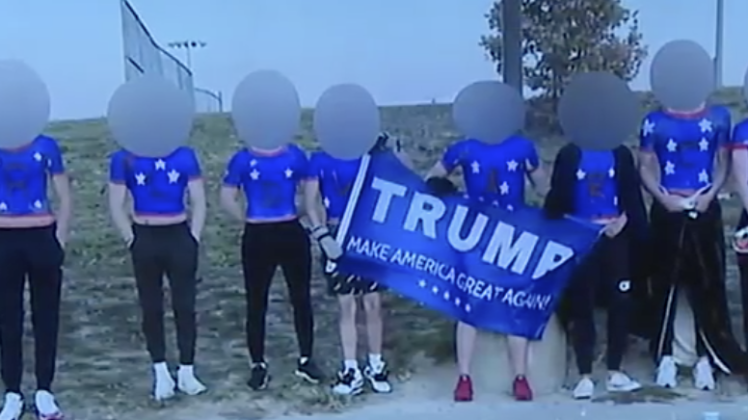 A Nebraska public school is defending a group of patriotic young people who displayed their love for America and President Trump at a recent high school football game.

The shirtless young men painted their bodies red, white and blue and spelled out the phrase: “2XWORLDWARCHAMPS.” One of the students also had a Trump 2020 Make America Great Again flag.

Mark Kalvoda, the principal at Elkhorn South High School, told television station WOWT that the football team’s theme that night was pro-USA. And he said the boys were well within their rights to participate.

Good for you, Mr. Principal!

But someone fired off a deceptively edited photograph on social media that only showed the words, “WORLDWAR.”

It’s this kind of leftist mentality that should deeply concern freedom-loving patriots. I write about this in my new book, “Culture Jihad: How to Stop the Left From Killing a Nation.” Click here to read.

“Trying to deceptively shame young people into feeling like they can’t express patriotism for our great country and our veterans is the most shameful, childish and dishonest thing I’ve seen in 2020,” wrote on Twitter user.

@Bradford_Betz I’d like to support Mark Kalvoda in correcting the record regarding the Elkhorn South High School story accusing students of racism, white supremacy and threatening minorities at a high school football game. Every allegation is completely false. I was there.

WATCH: The principal said the game night theme was "USA Out," and students were supposed to show patriotism. But another parent questioned whether signs with a "Black Lives Matter" message would have been equally defended. @_CeceliaJNews reports.
https://t.co/m2hCB1BROD