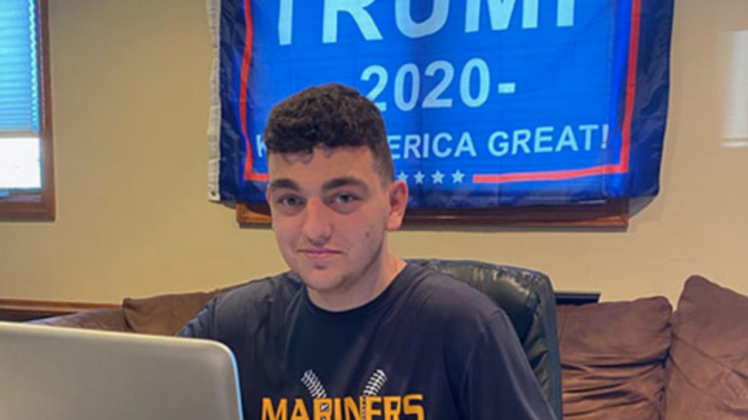 For his birthday he received a “Trump 2020” flag — which he proudly displayed on a wall in the privacy of his bedroom – in the home owned by his parents.

The other day Anthony was in the middle of an online Chemistry class at Toms River High School North when he was ordered by his teacher to remove the flag from his bedroom wall.

And when Anthony refused, he was kicked out of class, Jersey Shore Online reports.

“He said (his) room wasn’t a place for politics and that was not acceptable and ‘if you aren’t going to take it down you will have to get out of this class,'” he told the newspaper.

The following day Anthony’s English teacher delivered the same warning – either remove the Trump flag from his bedroom wall or he would have to leave the class.

Tara Jost told the newspaper that she was not pleased to hear that her son had been asked to leave the classroom.

“This is my house,” she said. “How dare he (the teacher) tell my son to leave his classroom because of something I have in my home? He’s a science teacher number one, number two we’re Americans and we all have the right in what we believe in and he was talking politics the first week of class which he has no right to do in telling them who to vote for.”

This is not the first time an American student has been ordered by a teacher to remove pro-Trump decorations and I doubt it will be the last. Ironically, the Chemistry teacher reportedly has a history of spewing leftwing politics in the classroom.

So if a teacher can turn a taxpayer-funded classroom into an indoctrination center for leftist ideas, why can’t the students do the same in the privacy of homes paid for by their parents?

I’m fairly certain the United States Constitution does not give public schools the right to regulate how students decorate their bedroom walls.