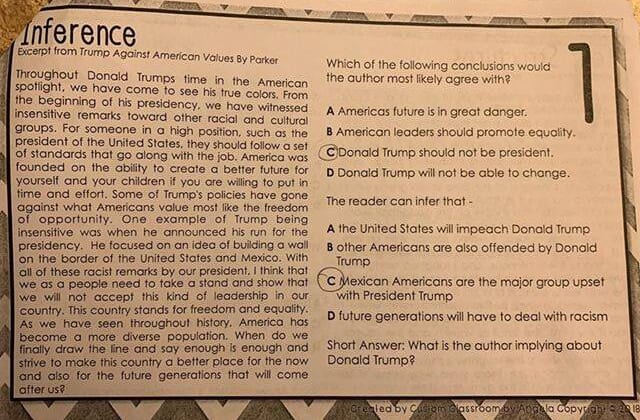 EDITOR’S NOTE: Facebook is cracking down on Conservative content. Many of you have complained that you never see our content in your news feeds. There’s only one way to fight back — and that’s by subscribing to my FREE weekly newsletter. Click here.
Students at a Texas middle school were assigned to read an essay that declared President “Trump is Against American Values.”
State Rep. Briscoe Cain said a concerned parent sent him a copy of the assignment which he then posted on Facebook.
“This individual has violated the sacred trust that every parent has with the State of Texas when they send their child into a public school,” Cain wrote referring to the teacher. “They have lost the privilege of being in a classroom with Texas children, and forfeit the title of teacher. No teacher should attempt to indoctrinate a child to their ideology, no matter who is in the White House.”
Click here to pre-order Todd’s new book – “Culture Jihad: How to Stop the Left From Killing a Nation.
The Goose Creek Consolidated Independent School District said in a statement the teacher had used poor judgement and the matter had been addressed and “corrective action” has been taken.
The essay stated some of the president’s policies “have gone against what Americans value most, like freedom of opportunity” and that “we have witnessed insensitive remarks toward other racial and cultural groups.”
The parent who reached out to the state lawmaker said he was concerned because his child had been exposed to classroom indoctrination.
“This type of non factual rhetoric has no place in our schools regardless of who the president is. My children have experienced great teachers in the classroom, but have also had to put up with those who see their role as indoctrinators, not educators. As a fellow graduate of Goose Creek ISD, I’m embarrassed that this is what our District tolerates,” the parent wrote in a note to the lawmaker.
The essay was one of 10 written by students in a lesson about inference.
On that note, I reckon we can infer that the teacher is not a big fan of making America great again.
Click here to pre-order Todd’s new book – “Culture Jihad: How to Stop the Left From Killing a Nation.