ANTIFA TEACHER: This is Why You Should Homeschool Your Children 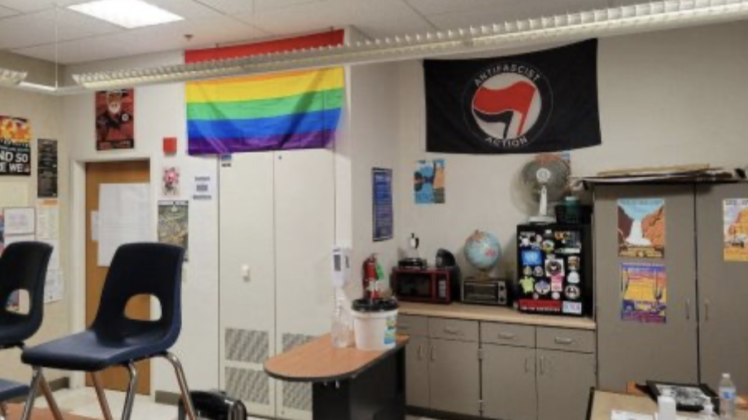 For quite some time I’ve been documenting the radicalization of American public school classrooms. It was a common theme in my book, “Culture Jihad: How to Stop the Left From Killing a Nation.” Click here to read.

Our public schools have been overrun by radical academics who are driving the massive social and cultural change that’s occurring in our society. Educators, inspired by former President Barack Obama, have been fundamentally transforming our nation from the comfort of their classrooms.

The latest evidence came courtesy of Project Veritas, a non-profit journalism organization that exposes corruption and dishonesty in public and private institutions.

Project Veritas captured Advanced Placement government teacher Gabriel Gipe on an undercover video boasting about his intention to goal to turn your kids into Communist revolutionaries.

“I have 180 days to turn them [students] into revolutionaries…Scare the f*ck out of them,” said Gipe, a teacher at Inderkum High School in Sacramento, Calif.

And so far – Mr. Gipe’s nefarious plan is working. His classroom is a museum for radicals — from the rainbow flag and a portrait of Chairman Mao to a giant Antifa flag.

The teacher also keeps tabs on the political leanings of his students. over the years his students have gone even further to the left.

His goal is not to teach Advanced Placement Government. His goal is to replace our government and fundamentally transform America.

“What can we do now to root out this culture that keeps perpetuating hyper-individualism, hyper-competitiveness, capitalist exploitation and consolidation of wealth…I do think that it’s important to understand that as an extension of an economic revolution, they [Chinese Communist Party] were changing the base, and then they went to change the superstructure. You cannot change one without the other. You can’t have cultural shifts without the economic shift, and vice versa,” he said.

And he’s not the only teacher at Inderkum High School who has turned his classroom into a Communist training camp.

“There are three other teachers in my department that I did my credential program with — and they’re rad. They’re great people. They’re definitely on the same page,” he said.

Folks, I’ve been warning about this for years — unless we root out the anti-American, anti-Christian radicals inside our classrooms – we will not have meaningful change in America.

One more note – when Project Veritas confronted Sacramento school officials — they were the ones thrown out of the building.