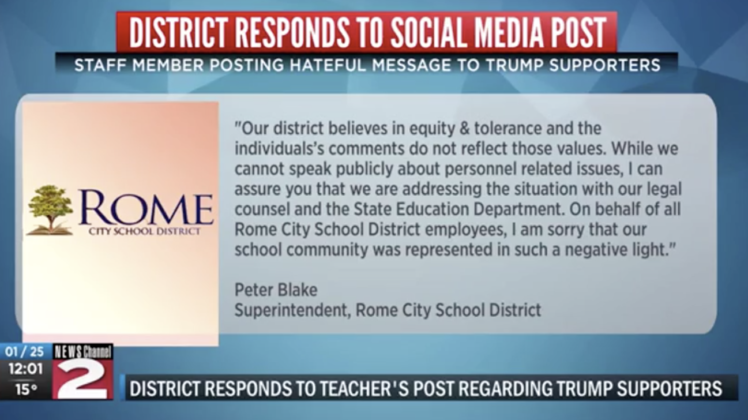 A school teacher in Rome, New York is facing backlash after he posted a hateful message directed at supporters of former President Donald Trump.

The Facebook post called on “white privileged Trump supporters” to go away, calling them “scum and a plague upon this world.”

The post, which included profanities, said in part, “just want to remind the white privileged Trump supporters, who are eerily silent of late, that you’re scum and yourself a plague upon the world. I hope the universe blesses you with infertility and the inability to (urinate) without it hurting,” the Rome Sentinel reported.

“Y’all extinct. Go the f*ck away. Be shameful. We will never forget,” the teacher wrote. “Oh, and if you’re family or consider yourself a close friend and voted for him, go f*ck yourself.”

School superintendent Peter Blake apologized to the community on behalf of the school district.

“Our district believes in equity & tolerance and the individual’s comments do not reflect those values. While we cannot speak publicly about personnel-related issues, I can assure you that we are addressing the situation with our legal counsel and the State Education Department,” the superintendent wrote on Facebook. “On behalf of all Rome City School District employees, I am sorry that our school community was represented in such a negative light.”

Local taxpayers are furious and want the teacher fired.

“He should be immediately dismissed and his job should be terminated. This is considered hate speech,” one resident said. “Does this not incite anger, does this not target one group of people. If this teacher’s words were directed at Biden supporters he would have already been reprimanded by the teacher’s union and terminated.”

“I wouldn’t want this guy teaching my children, let alone other children. Sounds like a very angry guy,” wrote another resident.

Mr. Mendoza has been invited to appear on The Todd Starnes Radio Show to explain his post. So far, he has not responded to our invitation.