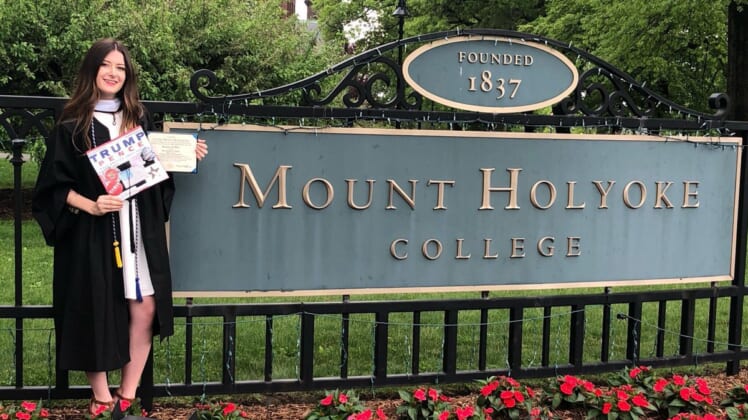 What was supposed to be a celebration of a four-year collegiate journey for conservative writer and activist Kassy Dillon, was soured by a group of hecklers who booed her at the Mount Holyoke College commencement earlier this month.

Dillon was a guest on the Todd Starnes Radio Show – describing how a group of 15-20 students proceeded to boo her as she stepped forward to receive her diploma.

“It’s a very small school, so most of the students knew what my political ideology was, and so during graduation, as I’m watching all the commencement speakers, there’s students already kinda heckling me, and just saying rude things to me” Dillon said.

Dillon said that she was “not expecting to get booed,” but by doing so, the students “kinda proved what I’ve been saying for four years, that civil discourse is not going well on college campuses, and that’s because the left and the right aren’t communicating because the left has demonized everyone one the right.”

Dillon was very clear to point out that not all of her class was rude to her, and that the radical leftists are “not huge numbers, but they’re very loud.”

Dillon told the listeners of the Todd Starnes Show that during the commencement, students began tweeting at her and criticized her for clapping for commencement speaker and House minority leader Nancy Pelosi.

“I clapped for her out of respect,” Dillon said. “I don’t agree with a lot of things she said, but I’m being respectful.”

Dillon said that she was excited to have Pelosi as her commencement speaker even though she doesn’t agree with anything the Congresswoman believes in, saying “it was cool having a big name at my commencement address.”

The treatment Dillon received from her fellow classmates surprised even her liberal college professors, who she said were “shocked” at the way she had been treated.

“When they were in college,” Dillon said. “Liberalism was about free speech, about talking to other people, and it’s just morphed into something else, and it shocked them as well.”

The recent graduate said that she wasn’t asking for people to feel sorry for her, but instead wanted “everyone to know what conservative students go through.”

“I want to empower conservatives to speak up,” Dillon said. “A lot of us are STEM majors and we are worried about getting jobs after graduation, especially if you want to go to Silicon Valley. So that’s why I created a blog called Lone Conservative, which has 250 conservative students from all around the country that write about things that happen on their campuses, and about their ideology in respect to conservatism.”