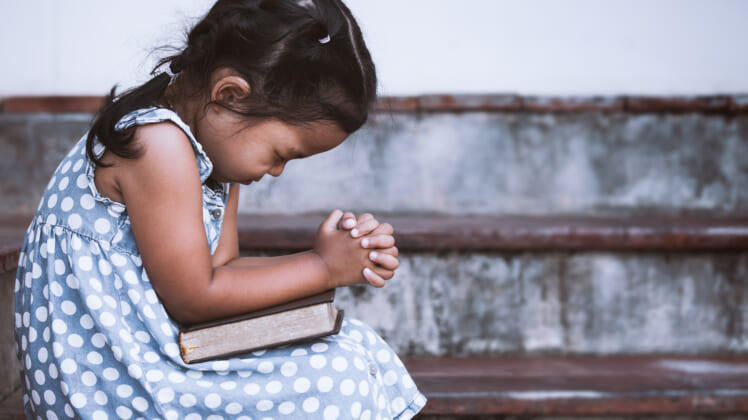 An Illinois school district is under fire after they confiscated a little girl’s Bible while she was reading during recess, the American Center for Law and Justice alleges.

“How could this still be happening in America,” the ACLJ asked in a statement.

The short answer is because we have a bunch of godless, anti-Christian Democrats leading our nation’s public education system. That’s also the long answer, by the way.

Our public schools have been transformed into godless indoctrination centers for the left – brainwashing our children and filling their minds with anti-Christian and anti-American propaganda.

Just last month a Michigan valedictorian was ordered to remove “God” and “Christ” out of her graduation speech.

And there was yet another Michigan graduate who was told not to talk about her Christian faith during an award’s ceremony at her school. Listen to that story on my podcast.

As I wrote in my latest book, “Culture Jihad: How to Stop the Left From Killing a Nation,” the best course of action is for parents to remove their children from public schools and consider homeschooling. It’s the only way to save the nation. Click here to read my book.

Anyway, back to this outrageous situation in Illinois.

The ACLJ did not release much information about the incident in Illinois. They declined to provide the name of the school or the city where it happened.

The second grader, named Gabrielle, liked to bring her Bible to school and read it during recess.

“Sometimes she reads it aloud, and sometimes other kids listen in and talk with her about what she’s reading,” the ACLJ said. “Constitutional crisis? It shouldn’t be; but little Gabrielle had her Bible taken away by a teacher and was told, ‘You just can’t be doing that.'”

The school reportedly contacted Gabrielle’s parents and told them that their daughter was not allowed to read the Good Book during recess.

“When the parents pushed back, the school backed off a bit – she could read it during outside recess but not during inside recess,” the ACLJ reported. “The school confirmed that no student nor any parent of any student had complained about Gabrielle’s reading or even mentioned it.”

It was a simple case of public school officials’ hypersensitivity to the specter of a threat from the ACLU or some similar spreader of long-debunked propaganda about “separation of Church and State.”

Instead of threatening the school district with a lawsuit, ACLJ fired off a letter reminding them of a very important Supreme Court case, Tinker v. Des Moines Independent School District.

That ruling held that students do not “shed their constitutional rights to freedom of speech or expression at the schoolhouse gates.”

A student may not be prohibited from expressing his or her views on politics or religion unless the school has reason to believe that the speech or expression will “materially and substantially disrupt the work and discipline of the school,” the ACLJ noted.

“We’re happy to report that after reviewing our letter, the school thanked us for educating them and removed all restrictions on Gabrielle’s reading,” the ACLJ reported.

That’s the only way we are going to root out this hatred and animosity towards Christian students in our nation’s public school system.

But let’s be honest, had Gabrielle been reading “Rules for Radicals” to her classmates instead of the Holy Bible, she probably would have been given a gold star – and a cookie.

Todd Starnes is the host of The Todd Starnes Show, heard daily 12p-3p eastern. Click here to sign up for his free newsletter.