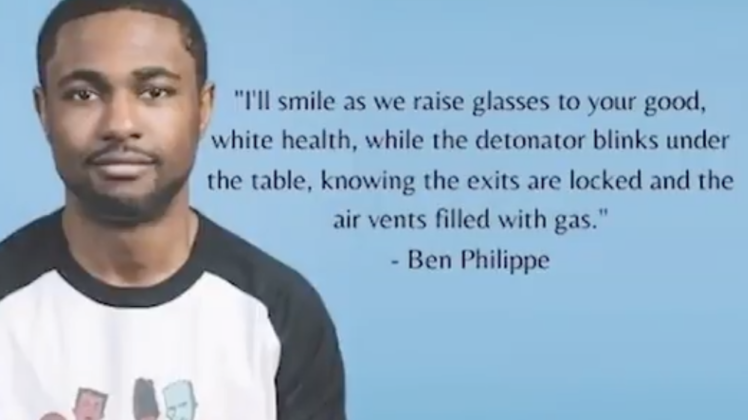 This guy teaches at Barnard College.

Ben Philippe wrote a book titled, “Sure, I’ll be your Black Friend” which describes “detonating” white people while nearby air vents spew out noxious gas.

“When this race war hits its crescendo, I’ll gather you all into a beautifully decorated room under the pretense of unity,” Philippe said. “I’ll give a speech to civility and all the good times we share; I’ll smile as we raise glasses to your good, white health, while the detonator blinks under the table, knowing the exits are locked and the air vents filled with gas.”

As the Post Millennial reported, “After the host read this passage aloud, she responded by saying: ‘I mean that’s… I’m a Jewish person, and my grandparents survived the holocaust. I can’t tell you how it felt to read that sentiment, and I wanted to say to you that I’m so sorry that your experience of the world made you feel that way.'”

Listen as Philippe describes that scene in his book:

AUDIO: Author Ben Philippe talks to CBC about his book, where he writes about trapping white people in a room, where they would then be blown up and gassed. pic.twitter.com/HdZ5yyzgVM