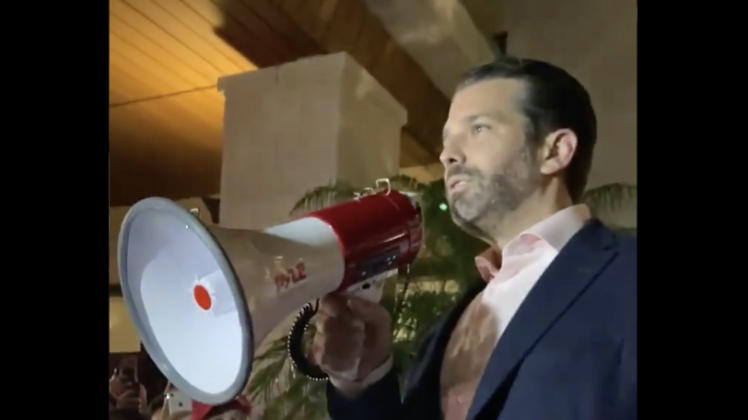 Armed guards blocked as many as 600 students from entering the building, according to local news and eyewitness accounts.

Students chanted, “Let us in,” but to no avail.

Palm Beach County released a statement saying that Turning Point USA over sold their contract capacity by as many as 600 people.

Since students were unable to go inside, Donald Trump Jr. walked outside and addressed the cheering young people with a bullhorn.

We are out here with @DonaldJTrumpJr bringing SAS outside to the crowd that the county leftists are trying to keep out of #SAS2020– we are doing everything we humanly can to make it available to everyone.

Please be kind to our @TPUSA staff, we are working on it all pic.twitter.com/AYEsjWBdIR

.@DonaldJTrumpJr gets the grassroots! If the students can’t come inside, he’ll go to them! #SAS2020 pic.twitter.com/Uw49UL6bIE

BREAKING: TPUSA students are being blocked from entering their national conference in Florida by the mayor https://t.co/4bVFrnOqMt

BREAKING: People are getting unregistered outside of SAS after the county began changing capacity maximums

Turning Point USA staff says they did not turn anyone away. However, police are blocking the doors, keeping tons of students out pic.twitter.com/o0ILnvxOOj

Just arrived at #SAS2020 in West Palm Beach and students are blocked from the entering Palm Beach County Convention Center due to a limit on capacity pic.twitter.com/cGmONX6qDJ