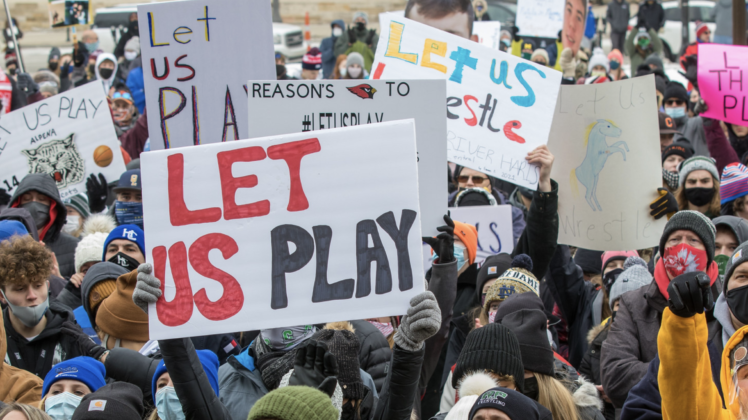 Thousands of high school athletes and their parents gathered outside the Michigan state capital to demand Gov. Gretchen Whitmer lift a temporary ban on winter sports.

Whitmer postponed the start of the winter sports season until Feb. 28 – the second time it’s been pushed back.

Whitmer, a vengeful Democrat, has ruled Michigan with an iron fist – banning other activities like planting gardens and fishing.

Michigan is currently the only state in the nation that has not restarted school sports.

The massive crowd shivered in 20 degree weather as they delivered speeches and chanted during the peaceful protest.

The protest was organized by a group called, “Let Them Play.”

The crowd was incredible, and the kids who got up and spoke really showcased the emotions that everyone is going through right now,” spokesperson Jayme McElvany told MLive.

“I feel like a mom to 60,000 kids right now, and I couldn’t be prouder of all of them for continuing to battle for their right to play organized youth sports. I’m fighting for all of them, and we are working together to do what is right and let them play again,” McElvany added.

It’s not about politics, McElvany said, it’s about athletics.

“If you can ignore 2,000 kids screaming and begging for you to let them play sports again, that’s unexplainable,” McElvany continued. “I’ve been adamant about keeping these rallies away from politics and creating a friendly message that is simply asking for Gov. Whitmer to work with us to make this possible.

Easily 2,000+ people here at the State Capitol for the Let Them Play rally despite 20 degree temperatures pic.twitter.com/uqlkbOvSBL

Great time at the Rally with my teammates! We just want to play and want the people around us to have our backs! #LetThemPlay #LetUsPlay pic.twitter.com/QBGB9d3i49

Several West Catholic athletes made their way to the State Capitol today to support the #LetThemPlay rally! They joined thousands of athletes, coaches, and legislators in an effort to convince our governor and health dept that we can safely play contact winter sports! pic.twitter.com/sSm0JRloLa

So proud to have been a part of this incredible event today. Thank you to all who helped make it happen. I can only hope our voices were heard. #LetThemPlay @MHSAA pic.twitter.com/vek4RZXngA

A lot of star power at today’s rally, with @Hugeshow, @JoeyRadio, @RepHuizenga, Darren McCarty, @AndreRisonPro & others taking the stage. But the real stars were all of the student-athletes who spoke so eloquently and their peers who were there in support. Great day! #LetThemPlay pic.twitter.com/rOEyK9i8QD