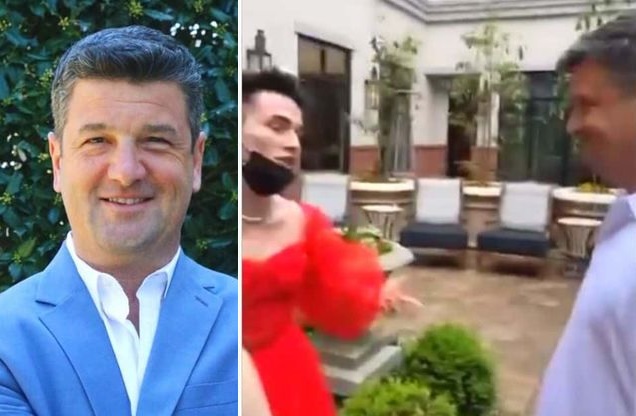 A businessman in Franklin, Tennessee fired for behavior in a viral video is denying harassing a gay teen going to prom. He says there is more to the story.

In the profanity-laced video, VisuWell CEO Sam Johnson is seen arguing with high school senior Dalton Stevens while his college boyfriend, Jacob Geittman, records the back-and-forth, which was posted on TikTok.

“You look like an idiot,” Johnson said in the video as the duo can be heard egging him on.

The gay couple told the local news they want the Harpeth Hotel incident to be a “teachable moment” that clothes are genderless.

VisuWell said it investigated the matter “speaking to individuals involved” and terminated him from being CEO.

“We unequivocally condemn the behavior exhibited by Sam Johnson in a recent video widely circulated on social media,” the company’s board of directors said in a statement.

Nationally syndicated radio host Todd Starnes tweeted at the company asking, “Did you ask to see the full, unedited video?”

Johnson denied the allegations as “entirely false” in a statement to Newsweek, saying the confrontation “wasn’t anything personal or involving a dress,” rather “about obnoxious, loud behavior by this group of teens.”

Johnson said he had approached the teenagers to request they “tone down the vulgarities around the families and children who were present,” including his own.

“We had just sat down for dinner at this restaurant that we frequent, and I was returning from the restroom when I was presented with their loud cursing,” he explained. “Making it about the dress was their idea and they edited out most of the exchange.”

“I have no ill will towards anyone or their personal choices, so long as it does not harm me or my family,” he concluded.