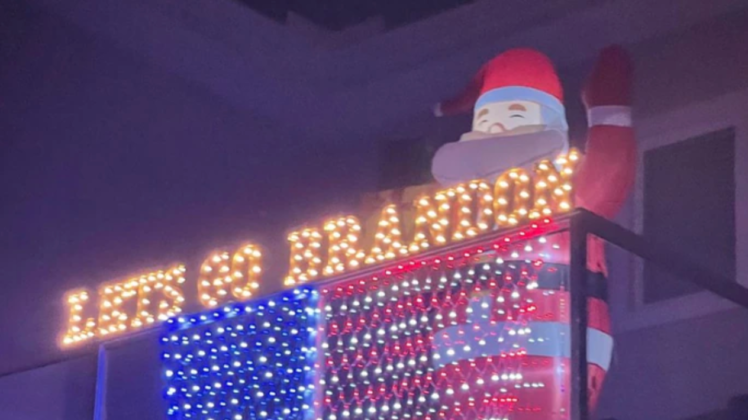 NEWSMAX: A Florida GOP congressional candidate has been threatened with fines by his homeowner’s association for spelling out “LETS GO BRANDON” in a holiday display on a balcony of his house.

Hyde’s display, which debuted on Dec. 12, earned a letter from his homeowner’s association, which sent him a “friendly reminder” that signs aren’t permitted. It also mentioned the possibility of a $150-a-day fine if he doesn’t comply, the Sarasota Herald-Tribune reported.

Hyde had bumper stickers and shirts made with “LETS GO BRANDON” on them, the Herald-Tribune said. He told the newspaper he wasn’t concerned that the phrase contradicted the spirit of Christmas.

“It’s fully in keeping with my personality and my campaign,” Hyde said. “Anybody who doesn’t like it, it’s one street … don’t come.

“Did I know it was provocative? Absolutely. Did I expect it to take on this level? No.”

Although he denied to the Herald-Tribune that the display was intended to get attention for his campaign, Hyde unveiled an even bigger display – that included lights showing “#FJB” — on Wednesday.

His Facebook account included a video showing people hanging out in front of Hyde’s house, and a campaign bus that had “Let’s Go Brandon” on it. Music played and supporters were offered free pizza, beer and wine.

“When you poke the bear, there are outcomes and circumstances,” Hyde said.

Hyde disputed that his original lighted letters were a sign — he said they were Christmas lights. “LETS GO BRANDON” was spelled with letters 9 inches tall and about an inch deep.

“They are individual letters that light up, that’s lights where I come from,” he said.

PATRIOT MOBILE IS THE NATION’S ONLY CHRISTIAN CONSERVATIVE WIRELESS CARRIER. I MADE THE SWITCH AND YOU SHOULD, TOO! CLICK HERE FOR MORE INFO – ALONG WITH GREAT DISCOUNTS FOR VETERANS AND FIRST RESPONDERS!

Hyde said the homeowner’s association, located in blue-leaning area, was enforcing rules selectively and targeting the “LETS GO BRANDON” display because they disliked it.

“If I put a message up there they liked, they’d be slapping me on the back,” Hyde told the Herald-Tribune. “It’s got everything to do with they don’t like what it says.”

He told the newspaper he was willing to risk being fined for the new display, which he planned to remove after the holidays.

John Habbert, president of the Laurel Park Homeowner’s Association, emailed the Herald-Tribune and said the dispute had “nothing to do with politics.”

CLICK HERE TO READ TODD’S POWERFUL BOOK: “CULTURE JIHAD: HOW TO STOP THE LEFT FROM KILLING A NATION.”

“This is a simple contract issue,” Habbert said in the email.

“When he purchased his house, Mr. Hyde signed documents stating that he would abide by all HOA rules — including no signs other than house numbers or For Sale notices. Other residents have been asked to remove signs and have complied without any problems, but Mr. Hyde refuses to do so.”