NBA Players Take a Knee During National Anthem on September 11 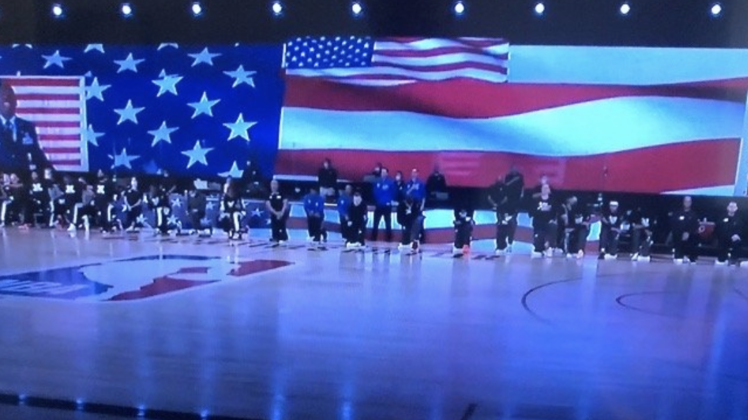 The National Basketball Association is facing fierce criticism on social media after players took a knee during the national anthem on the 19th anniversary of the Muslim terrorist attacks of September 11, 2001.

“Rough look for NBA players to kneel for the national anthem on the anniversary of 9/11,” Clay Travis wrote on Twitter.

More than 3,000 of our fellow countrymen died on that day and a bunch of pampered athletes could not muster the common decency to honor their memory.

Nor could they muster the courage to honor the men and women who fought for the flag that they disparaged.

“These lumps of garbage can’t even stand for the National Anthem on the 19th anniversary of 9/11? This shows how much hatred they have for America,” wrote one fan. “I hope Americans are passionate enough to never forgive these pandering assholes for this.”

Another wrote, “I hope America doesn’t forget the @nba kneeling for our national anthem on 9/11. Some days are more important. Yesterday everyone should have been an American 1st and an activist 2nd.”

Click here to read Todd’s new book, “Culture Jihad: How To Stop the Left From Killing a Nation.”

NBA Players Kneel During National Anthem on Anniversary of 9/11

MY FAMILY WILL NEVER WATCH ANOTHER NBA GAME AGAIN! https://t.co/JUSr5O7nyX