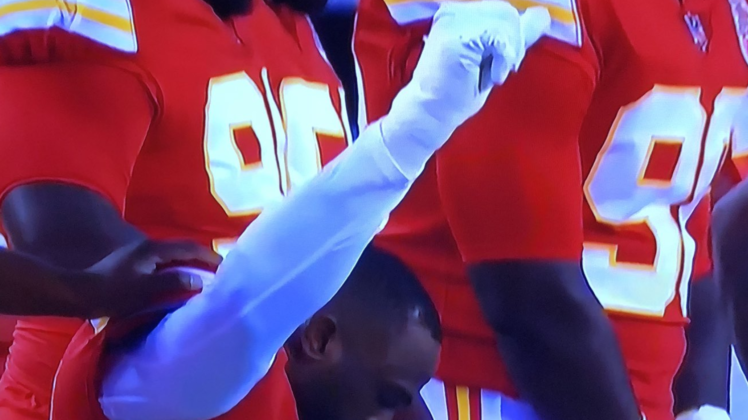 The National Football League opened its season by honoring the so-called Black National Anthem and disrespecting the Star-Spangled Banner.

The Houston Texans refused to take the field for either song — showing perhaps the most egregious example of cowardice in recent memory. What kind of men would rather hide inside a locker room instead of honoring our great nation?

Most of the Kansas City Chiefs stood for the Star-Spangled Banner. However, at least one player was seen taking a knee while thrusting his fist into the air.

But the entire team stood at attention for the so-called Black National Anthem.

NBC reports that Houston left the field before the playing of both anthems because they didn’t want to make it seem like they were favoring one song over the other, so they stayed in the locker room for both.

Before the start of the game the crowd was told to stand for a moment of silence and racial equality.

Instead, many in the crowd jeered and booed — as any red-blooded, patriotic American should’ve done.

They stood at attention for the Black National Anthem – but they disrespected the Star-Spangled Banner. #unAmerican #racist pic.twitter.com/z96YZnbzht

If the players on the field can disrespect our nation and spit on our troops, the fans in the stands should be able to voice their objections.

There is only one national anthem – one. To suggest anything else is to suggest there is more than one nation.