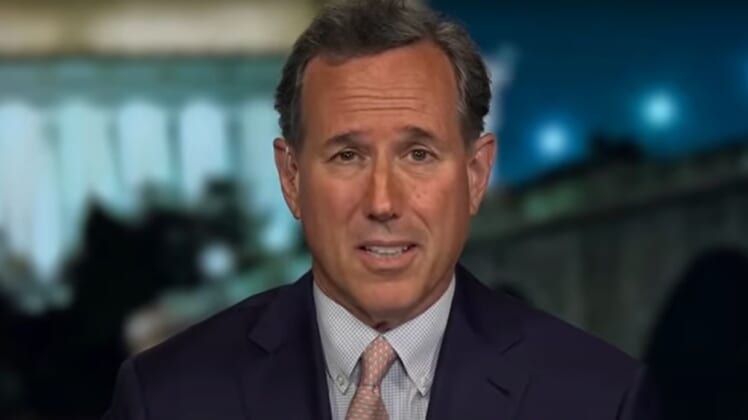 Former Republican senator and conservative commentator Rick Santorum fired back at CNN’s decision to drop him for past comments about Native American culture, claiming he was “savaged for telling the truth,” Fox News reports.

The former CNN analyst faced backlash after a speech resurfaced where he told an audience at Young America’s Foundation conference last month that immigrants had “birthed a nation from nothing” based on Judeo-Christian values.

“We birthed a nation from nothing. There was nothing here. Yes, we have Native Americans, but there isn’t much Native American culture in American culture,” Santorum told the group. “It was born of the people who came here, pursuing religious liberty, to practice their faith, to live as they out to live and have the freedom to do so.”

Santorum released a statement following backlash saying, “I had no intention of minimizing or in any way devaluing Native American culture.” He later cleared up his comments on CNN’s “Cuomo Prime Time,” saying he was talking about the founding principles of America.

“I gave a long talk about the Constitution and the Declaration of Independence, and what I was saying is that we sort of created that anew, if you will,” the Republican commentator told Cuomo. “I was not trying to dismiss Native Americans. In fact, I mentioned them because they were here, and they did have an impact.”

It wasn’t enough, and CNN canceled the outspoken conservative.

“You get savaged for telling the truth,” Santorum told “Hannity” Monday. “I told the truth here and you have other people who believe you know, Don Lemon came on right after my interview and said that Native Americans founded the United States of American. And again, you are entitled to your opinion, but not the facts, and that’s where I think we have gotten off-kilter here a little bit in America.”

Santorum added: “I have no animus, I appreciate the opportunity that they gave me, but it shows that the left is intolerant. They are worried, I’m sure that their viewership which is very left was going to pay a price. And the intolerance of the left is the issue in the cancel culture that is flowing from it.”