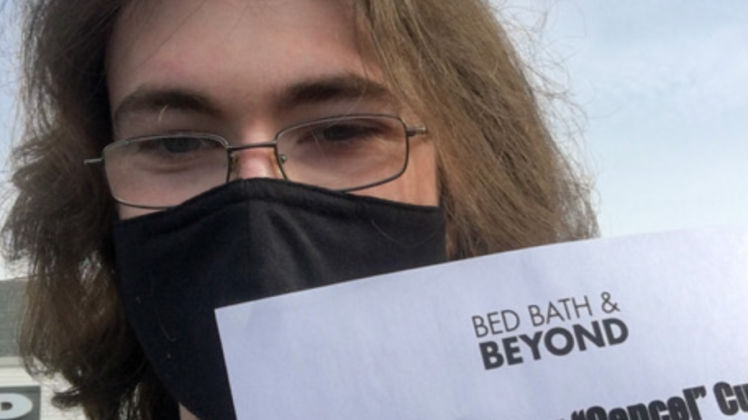 NEWS RELEASE: Dozens of shoppers abandoned their shopping carts at the check-out counter for Bed Bath & Beyond in Larkspur, California, today in protest of the store’s boycott of Mike Lindell’s MyPillow company.

Lindell, who was permanently banned from Twitter today, employs hundreds of Americans at his manufacturing company.

“This isn’t about pillows. It’s about the continual punishment of conservative speech,” said Media Action Network founder Ken LaCorte. “And we’ve had enough.”

“Every time we turn around, another conservative has been silenced under false pretenses of ‘hate’ or ‘isms’ or the most recent offense-de-jour. We’re fighting back.”

Protestors left a free speech statement for Bed Bath & Beyond CEO Mark Tritton, as well as a $20 tip to checkers who rang up the abandoned carts.

Dawn Rosenmayr, a real estate investor from San Francisco who joined the pushback told reporters, “If you cancel one American, you cancel all Americans. That’s wrong. Mike Lindell was ‘cancelled’ because of his support for President Trump by Bed Bath & Beyond, Wayfair and Kohl’s. When did we lose our free speech rights?”

The petition was signed by 8,856 people on its first day online. More protests will follow.

“My liberal friends encouraged us to break their windows and burn the store, but this is a peaceful protest that will create discomfort while preserving jobs and businesses,” said LaCorte.