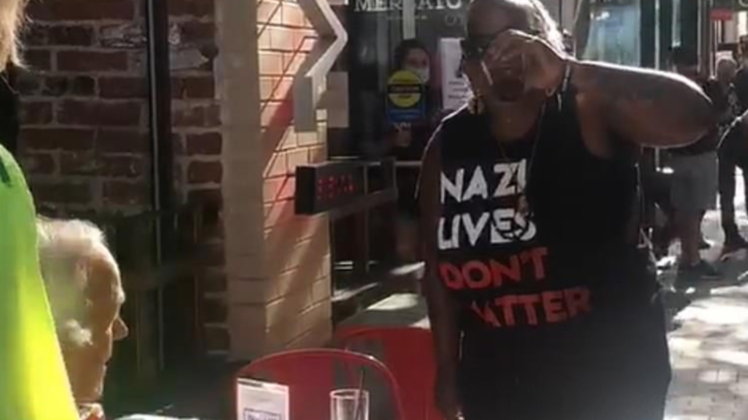 The Black Lives Matter mob has been terrorizing citizens across the country – trapping motorists in their cars, pillaging and plundering local businesses. But their latest tactic is even more troubling.

Social media is filled with videos of Marxists invading restaurants – screaming the most vile things at diners. Flipping over tables. Threatening people out for a good time on the town.

In Washington, D.C. they ordered patrons to pledge their allegiance. In Rochester, New York, they literally shut down a white tablecloth restaurant.

In Pittsburgh the BLM crowd verbally harassed an elderly couple trying to enjoy a meal at an outdoor cafe.

One protester told the predominantly white diners: “F**k the white people that built the system.”

The BLM Marxists even targeted a McDonalds. They surrounded the manager – clearly not happy with their Happy Meal.

The group marched downtown with a sign reading, “Abolish the Police,” and confronted people dining outside. Protesters chanted, “F*** the white people that built the system!” and “F*** the police!”

All that to say – if you take the family out for dinner – be very careful. You never know when the mob might show up at the Outback. At the very least you should probably ask your server for an extra steak knife.

Be sure to listen to my national show live noon to three eastern on the radio or you can download the podcast at ToddStarnes.com.

The manager(Ed) @ this McD’s was upset that the protest was in front of the store. The crowd agreed to go in and give them a few hundred dollars worth of food orders. As they were giving the food to the protestors, the manager; started to get nasty with them @PghCurrent @WPXI pic.twitter.com/K3lwfF3ATc