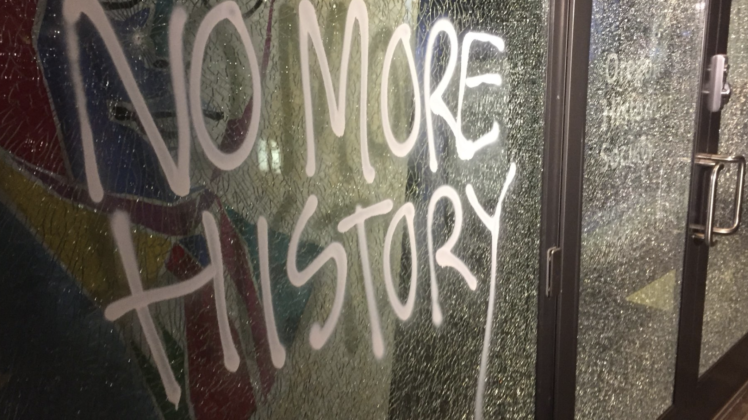 The violent mob – estimated to be as many as 200 thugs – set fire to the Apple store and smashed windows at dozens of other businesses and restaurants.

“Windows were also broken at the First Christian Church, a location known for their generosity in feeding over a thousand meals weekly to the homeless,” the police department reported.

Other stores that were damaged in the terrorist attack included Nordstrom, Verizon, Nike, the Oregon Historical Society and more.

“In addition to burglary and vandalism, individuals engaged in the crime of criminal mischief by damaging planters and applying graffiti,” the police department reported.

“Damage to businesses hurts our City. Our community has made it clear that it will not tolerate wanton violence and destruction” said Acting Chief Chris Davis. “No one is entitled to break windows, set fires, or attack police officers. If you choose to participate in this kind of criminal activity, you can expect to be arrested and prosecuted.”

And yet only three people were arrested and charged with crimes. What the heck?

“None of this destruction tonight has anything to do with the important work of racial justice and reconciliation our community and our nation need at this critical time in our history,” the acting police chief said.

Dozens of buildings damaged or destroyed and yet the Mainstream Media continues to call these terrorist attacks “peaceful protests.”

Why hasn’t President Biden condemned the violence? Why hasn’t he reached out to the victims of these terrible crimes?

More photos of damage to businesses in Downtown Portland. A community member suffered a flattened tire after striking a metal spike device in a roadway. pic.twitter.com/SqpxihgcY7

Antifa set the Apple store in Portland on fire pic.twitter.com/h3hqxJW1gq

A building attached to the Apple Store in Pioneer Place is lit on fire as Security guards the Apple building. #Portland #Protest #riot pic.twitter.com/m8Iio5J2ul

The glass doors of The First Covenant Church have been smashed. It’s just down the street from the Kelly building. pic.twitter.com/hwiaPdY3gH