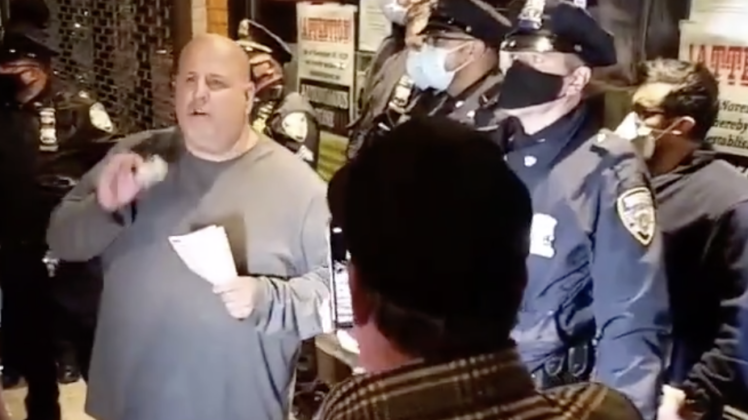 Citizens of Staten Island are enraged after the New York City Police Department raided a beloved local pub and arrested one of the owners for defying Mayor Bill De blasio’s China Virus lockdown.

The owners of Mac’s Public House had taken a page from Black Lives Matter and Antifa by declaring their pub an “autonomous zone.”

Keith McAlarney and Danny Presti said it was a last-ditch effort to save their business from going under.

“Why is everybody allowed to cram themselves into a Target or a Best Buy or into the mall or any other large company, big corporation companies, and they’re there running shoulder to shoulder with each other and everything like that, but my establishment all of a sudden somehow seems to be the only place that somebody is able to contract corona,” McAlarney said on Monday.

“As if like we don’t know how it is to put safety measures in there so everybody can end up being safe.”

“For months, the whole entire food and beverage industry wanted to work with the government to end up helping them,” he added. “We’re the professionals when it comes to this.”

Every freedom-loving patriot in the New York City area should descend upon the public house and defy De Blasio and the NYPD.

Shame on the New York City Police Department. You guys should know better. There’s a fine line between law enforcement and the gestapo.

Staten Island: An owner of Mac’s Public House was led away in handcuffs by City Sheriff’s Department officers Tuesday night as various agencies descended on the Grant City tavern. pic.twitter.com/8NYcjyB0jh

NY ?: Bar owner Danny Presti is taken away in handcuffs. Watch the full following Newsmax TV interview from outside the establishment: https://t.co/LG0liSsrHj pic.twitter.com/rRrhx6XEB8