UPDATE: No Explosive Found in Suspicious Truck Near Nashville 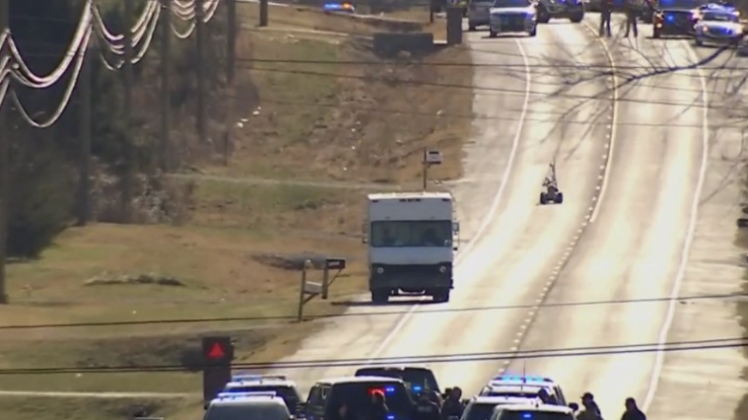 A statement released by Rutherford County Sheriff’s Office in regards to the suspicious vehicle that was pulled over on Highway 231 South. The scene is still active. pic.twitter.com/0AUppvaJJJ

The robot has done this a few times. It appears they may be trying to open the door or break the window to get inside somehow. @WSMV pic.twitter.com/abRFmf1Xse

BREAKING: no explosives found in truck. Scene is clear. Rutherford Co. investigating the incident and should give an official statement soon. Road should be opening soon. @WSMV

DEVELOPING STORY: The Wilson County Sheriff’s Department, the Tennessee Highway Patrol and the FBI are on the scene of a suspicious white box truck in Lebanon – a town near Nashville.

Television station WKRN reports the box truck is “playing audio similar to what was heard before the Christmas Day explosion in Nashville.”

The television station reports via Twitter that one person has been detained. Watch live coverage from WSMV below.

BREAKING: @JoshBreslowWKRN reports box truck is “playing audio similar to what was heard before the Christmas Day explosion in Nashville.” At least one person has been detained. https://t.co/bSFujPPOqS

#BREAKING: Highway 231 South from Cedars of Lebanon State Park to Richmond Shop Road in Wilson County shut down “due to a suspicious vehicle,” @wilsonsheriff reports. No additional information released, but everyone urged to avoid area.

BREAKING: Wilson County Sheriff’s office and FBI are investigating this white box truck on Murfreesboro Rd. in Lebanon, TN after a call that it was driving through Rutherford Co. playing an evacuation message – authorities have NOT confirmed whether that message played pic.twitter.com/haaCOFGz32

Highway 231 South from the Cedars of Lebanon State Park to Richmond Shop road is currently shut down due to a suspicious vehicle. Please avoid the area and seek an alternate route. We will post updates as more information comes in.