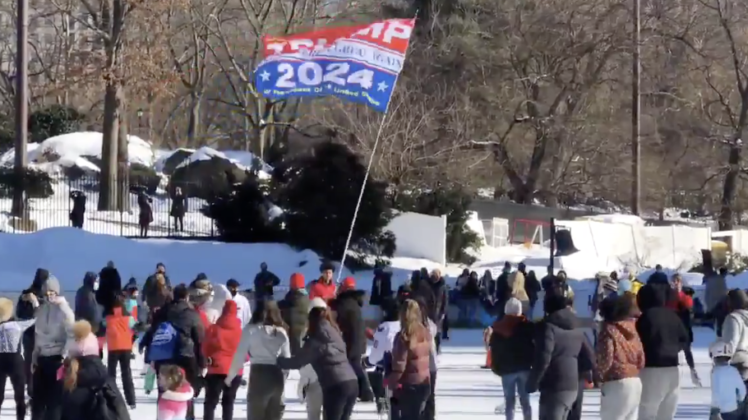 A crowd of people cheered as a man waving a giant “Trump 2024” flag was attacked on an ice skating rink in New York City’s Central Park.

The man, who identified himself as Dion Cini, was helped off the ice and appeared to suffer only minor injuries.

“I was tackled, pushed and shoved to the ice,” Cini said during an interview on The Todd Starnes Radio Show. “(Some guy) put me in a chokehold.”

He said the worst part was the crowd.

“The entire crowd was cheering, ‘kill him, hurt him,'” Cini said. “That’s what upset me more than anything.

He said it was especially sad considering that Democrats were supposedly calling for Americans to be peaceful.

“I thought this was supposed to be a unity thing now,” he said.

It’s unclear if anyone was arrested or cited for the attack.

The incident happened on the final day of business for both of Central Park’s ice rinks.

The rinks, which are both managed by the Trump Organization, are being shuttered by City Hall to punish the former president for the deadly Jan. 6 Capitol riot, The New York Post has learned.

The Trump Organization says its last day of operating the iconic Wollman Rink and the smaller Lasker Rink at the park’s northern end will be Sunday.

“Instead of focusing on a dying city which everyone is leaving because of rising crime, high taxes, closed businesses and totally incompetent leadership, the Mayor is painting signs in front of Trump Tower and trying to destroy the only outdoor activity available to children during a pandemic,” Eric Trump said in a statement to the Daily Mail.

The rink contracts had been set to expire in April, but Mayor de Blasio has moved to ice Trump out a month early, effective Feb. 26.

The Trump Organization is closing its doors after close of business on Sunday, so it will have time to pack up its belongings — including some 1,700 pairs of ice skates — and move out.

The party of unity !! People cheering as my friend @dioncini was attacked in Wollman Rink in Central Park for waving a Trump 2024 flag !! pic.twitter.com/8Wj5QOyFQs