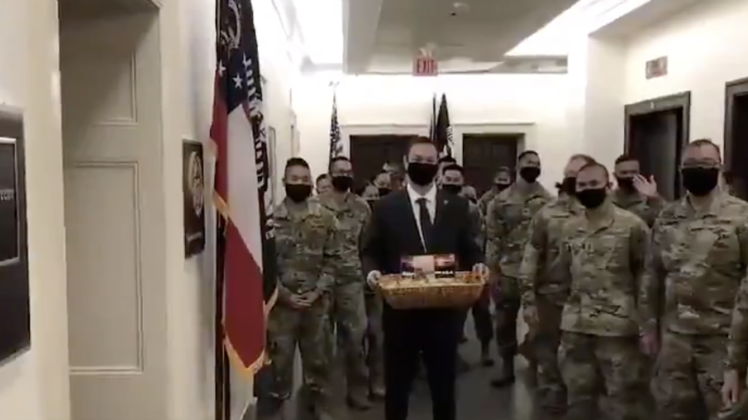 Something very creepy and un-American happened outside the congressional office of Rep. Marjorie Taylor Greene (R-GA).

During remarks at CPAC, Greene mistakenly mentioned that Guan was a foreign land.

In response, Guam’s representative in Congress, led a large contingent of Guam National Guard troops – in uniform – to her office.

Rep. Michael F.Q. San Nicolas, Guam’s only representative, and the troops briefly met with one of Greene’s aides, who said the congresswoman was not at her office.

The congressman has yet to explain why he summoned military troops to escort him to the Georgia congresswoman’s office.

In 2010, Rep. Hank Johnson (D-GA) became a national laughingstock when he expressed concerns about the impact of additional U.S. troops on the tiny island.

“My fear is that the whole island will become so overly populated that it will tip over and capsize,” Johnson said during a House Armed Services committee hearing.

To my knowledge, I don’t recall any lawmaker from Guam leading military troops to Mr. Johnson’s office.

And just imagine the outcry if a Republican lawmaker had led dozens of troops to the office of the black Georgia Democrat.

Why, there would’ve been accusations of insurrection and racism, white privilege and white supremacy.

The Mainstream Media would’ve demanded federal investigations and I have no doubt that the Republican lawmaker would’ve been thrown out of Congress.

But so far — there’s been nothing but silence from the Democrats.

“Uniformed service members recently criticized a private citizen for his First Amendment rights, & today a Dem lawmaker used soldiers in a political stunt against a GOP member,” he wrote on Twitter. “@SecDef Austin—This sets a dangerous precedent. It must stop now.”

The Democrats are attempting to weaponize the military against the American people. This cannot and must not be tolerated.