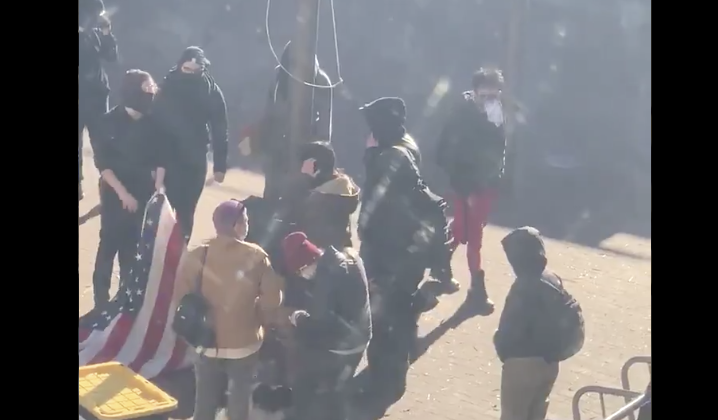 A raging gang of far left activists stormed city hall in Bellingham, Washington forcing the mayor to flee the building.

The city has been overrun by homeless living in tents on the front lawn of city hall and other government buildings.

Video shows the thugs removing the American flag from city hall and dragging it through the streets.

Mayor Seth Fleetwood told television station KIRO it is impossible to ignore the parallels to the storming of the Washington D.C. Capitol Building on Jan. 6.

“It was unsettling,” Fleetwood said. “They banged on the door and we got word they had somehow broken it open and were entering, and I was advised to leave,” he said.

The was ushered out a back door and driven away from the building to his car.

Journalists with The Bellingham Herald left the scene for safety reasons and moved a distance away after 10 a.m. after a confrontation began with protesters who had asked the journalists not to film, take photographs or document the protest on public property, the newspaper reported.

“Other members of the media and an official with HomesNOW! also were harassed over documenting the morning’s events and eventually left,” the newspaper said.

#BREAKING: Protestors broke into a locked city hall in Bellingham today. Mayor had to be escorted out for safety.

They also tore down the American flag outside. Stole a KGMI journalist’s mic and threw a hot drink on him.

They’re supposed to be here advocating for the homeless. pic.twitter.com/uIMbRVRwBl

Bellingham City Public Works crews are asking people camping outside of City Hall to move 25 feet away from the building. https://t.co/S4yLGtI07v