Minneapolis Mob Pulls Trucker From Tanker and Beats Him in Street 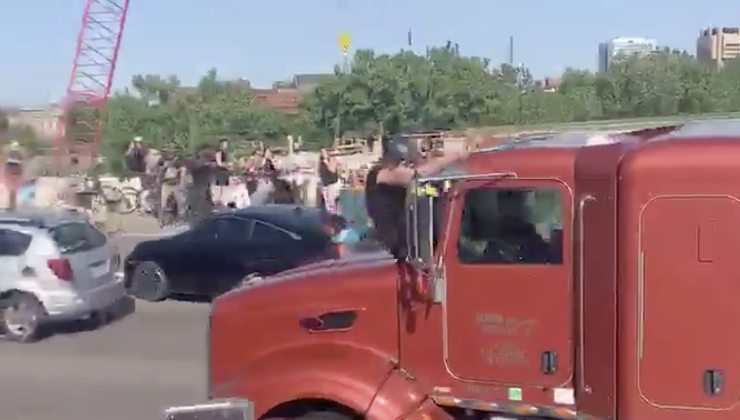 Minneapolis police say they arrested the driver of a tanker truck after he drove through a protest that was being held on an interstate highway.

The Minnesota Department of Public Safety says the roadway had been closed and it’s not known why the driver was on the interstate. No one protesting on the highway was injured.

Witnesses told television station KARE the truck driver had been honking his horn as he moved through the crowd.

“We could hear his horn,” the protester said. “He was holding the horn down the entire time.”

The crowd swarmed the truck and pulled the driver out — he was severely beaten. Police say he was treated at a hospital and then taken into custody.

There’s no word on whether this driver intentionally tried to run over the mob or whether he was simply on the roadway trying to deliver whatever he was hauling.

Normally, it is legal for trucks to be on the highway and it’s illegal for pedestrians to block the highway.

Protesters yell “stop, stop! It defeats our purpose!” as others attack the driver who seemingly just ploughed a semi truck into a large crowd. Driver is said to be in custody. Speechless. #minneapolis pic.twitter.com/SWAuNJplKU

Here’s video of the police showing up and putting the suspected truck driver in a squad, while pepper spraying the crowd. pic.twitter.com/IBqN88DYvW

BREAKING: Truck filled with flammable liquid being attacked on highway in Minneapolis, driver being beaten pic.twitter.com/uX56ZpSvZ0

This happened under an hour ago. My friend sent me this video from a #peacefulprotest in #Minneapolis. The highway had been closed long before this happened. I’m sick. pic.twitter.com/xrnmoIgIXr

Breaking News: At a Minneapolis protest a man in the semi truck plowed thru the crowd.
The protesters got the guy out of the truck & jumped him.
Police maced the crowd & got the driver.
It is believed the driver is in police custody.#minneapolisriots pic.twitter.com/a95gCfp5Q2

A semi-truck sped into a large crowd of protesters on a closed highway in Minneapolis. No one appeared to have been hit, officials say.

Authorities say the driver was taken to a hospital and placed under arrest. https://t.co/HgAtsjorJh pic.twitter.com/xkL9ANZwPT

A person driving a tanker truck just tried to ram hundreds of us as we peacefully marched through Minneapolis.

It’s not how we protest that upsets them, it’s that we have the audacity to rebel in the first place. #BlackLivesMatter #MN
pic.twitter.com/JDlKHjBWMZ