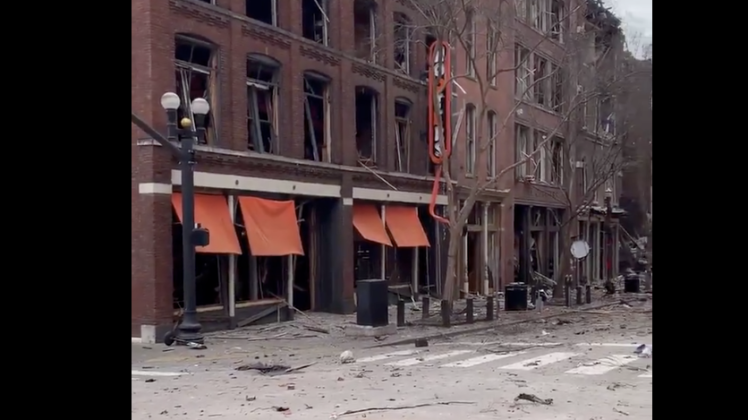 DEVELOPING STORY: The Metro Nashville Police Department confirmed that a recreational vehicle was broadcasting a message warning that a bomb would explode just moments before a catastrophic explosion happened in downtown.

A surveillance camera captured a portion of the recording as well as the initial explosion.

“All buildings in this area must be evacuated now,” the recording said in a loop. “If you can hear this message, evacuate now.”

Metro Nashville Police Department just confirmed the evacuation message heard prior to the explosion came from the RV. pic.twitter.com/AmlTYb1YW0

Officers had responded to a “shots fired” call around 5:30 a.m. in the downtown entertainment district nearly Commerce Street and Second Avenue.

“As officers responded they encountered an RV that had a recording saying that a potential bomb would detonate within 15 minutes,” the police department spokesperson said. “Officers upon hearing that decided to evacuate the buildings nearby.”

During the evacuation the RV exploded causing massive damage and injuring at least three people.

Another Nashville police spokesperson also weighed in on the warning.

“There were announcements coming from the RV and that’s the extent of what we can say at the moment,” he said. “

There have been no claims of responsibility.

Footage from the scene on 2nd Ave North as multiple agencies continue to work and investigate an explosion from earlier this morning. pic.twitter.com/5g40RhwNNl

Nashville PD’s Don Aaron: “We do not know whether anyone was in the RV when it exploded,” the megaphone warning people to leave “is believed to have been coming from the RV” pic.twitter.com/DwhhxK4Zqy