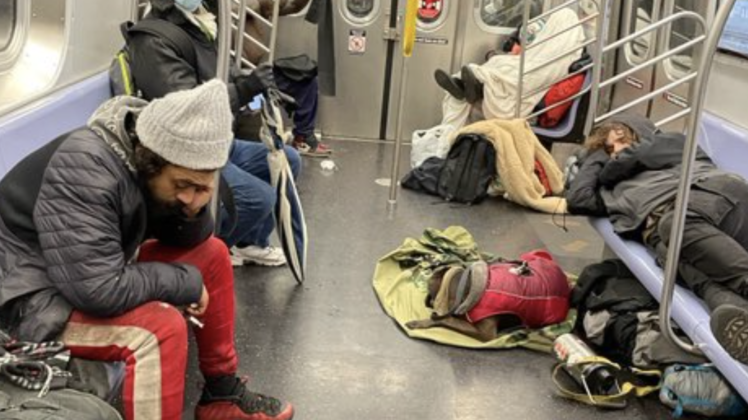 If you have plans to take a family vacation to New York City — don’t.

The video shows a number of filthy, unwashed homeless people camped out in one of the train cars.

As a longtime resident of New York City I can verify the slum-like conditions in the subway system. It’s pretty awful, folks.

“Why should working people and tourists be subjected to this,” Bratton asked. “How’s it fair to those who need services? Imagine the cops’ frustration with no support to deal with it.”

Bratton placed the blame on progressive policies that have taken much-needed funding from the NYPD. That comment drew the ire of Rep. Alexandria Ocasio Cortez.

“Of course they’re frustrated. It’s not policing’s job or purpose to address housing, provide healthcare or counseling, or solve the reasons people sleep on the subway. Maybe if we shifted some of that $11B/year spent on robo dogs to housing services we could get somewhere,” she wrote on Twitter.

You know why NY’s ‘recovery’ isn’t happening? This photo today on the E Train at 6:45am at 42nd & 8th says it all. Why should working people & tourists be subjected to this? How’s it fair to those who need services? Imagine the cops’ frustration with no support to deal with it! pic.twitter.com/rpxNh6dCCH