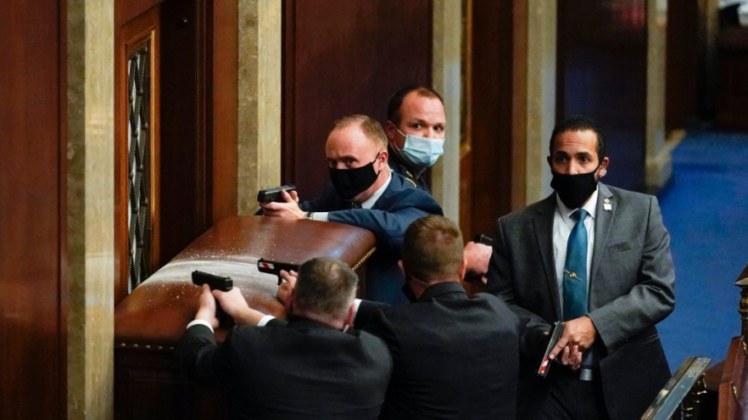 Rioters have stormed the U.S. Capitol building clashing with police and the Secret Service and causing all sorts of damage and destruction.

It is unclear if the rioters are Trump supporters or Antifa or a mixture of both.

Shots have been fired inside the Capitol and at least one person has been wounded according to eyewitness accounts.

This is absolutely unacceptable behavior. We are a nation of laws, not anarchy.

President Trump has issued a tweet calling for protesters to remain calm. He also urged them to follow instructions from the police.

But that’s not good enough.

President Trump should send in U.S. troops and secure the Capitol grounds.

We are the United States of America, not a third-world banana republic.

“Violence in any form is unacceptable. No one has the right to attack any federal institution regardless of motivation. Violent opportunists at the US Capitol grounds must be held accountable,” the acting secretary of the Dept. of Homeland Security said.

The crowd rushes a line of police attempting to block access to inner parts of the Capitol. Police are forced to retreat and stand down #DC #Washington #CapitolBuilding pic.twitter.com/WEGwumvimk

This does not look like a Trump supporter. pic.twitter.com/RSqXZNX4rS

Plain clothes individuals have drawn and fired their sidearms inside Congress.

Reports of one woman shot. pic.twitter.com/5yJmtQRrGv

Rioters are smashing windows outside the Capitol Building. pic.twitter.com/ZZOm2lFDvD