Pro-Criminal Fetterman Will Turn ‘Pennsylvania into the Sucking Chest Wound’ 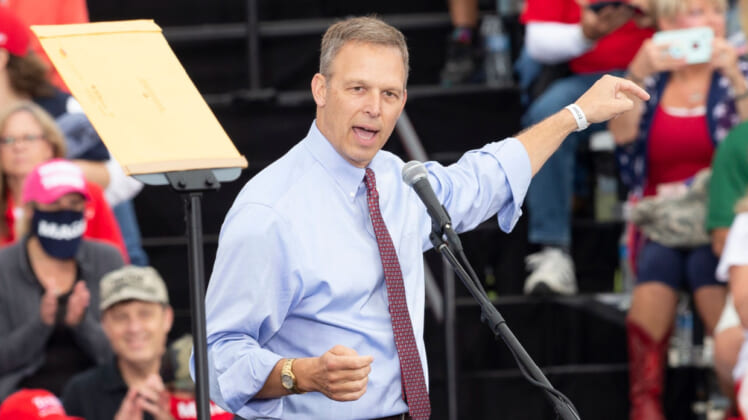 Rep. Scott Perry (R-PA) discussed on the“Todd Starnes Show,” Senate Democratic candidate John Fetterman, and how his policies have already turned the little town of Braddock, Pennsylvania (which Fetterman was mayor) into a ‘sucking chest wound’ for the rest of Pennsylvania if elected in November.

Perry says the following about Fetterman, “He became mayor of a failed little town, which has one of the highest crime rates in the country, if not the world… Meanwhile telling everyone he wants to legalize heroin, and on top of that wants to release a large portion of the prison population. So we can turn the rest of the Commonwealth of Pennsylvania into a sucking chest wound.”

This isn’t the first time this week that we’ve talked about John Fetterman. Earlier this week we uploaded a video of Fetterman back on the campaign trail, stumbling over his words due to a recent heart attack. Congressman Perry weighs in on this as well.

“The strategy is, is that they have a vessel, much like the one that they had with the president, and of course, look, we all lament John Fetterman’s stroke. We wish him well, we wish him the best of health and we hope he has a full recovery. But being in the Senate, where you have to represent the United States of America when you’re cognitively impaired, when it would, no one wants to denigrate the fact that that happened to him. It could happen to any of us. We’re very, very sorry for that misfortune. But you have to be able to cognitively process these complex issues and then be able to articulate them. And if you can’t do that, you know, it’s not a strike against you. It’s just that there are certain jobs you shouldn’t have.“

Listen to the full conversation here:

The following is a rush transcript from the Todd Starnes Show which airs daily from noon to 3:00 p.m. EST.

TODD STARNES: [00:44:51] Congressman Scott Perry on the Patriot Mobile Newsmaker Line today. Congressman, crime is off the charts all over the country. It’s insane. Here in Memphis, Tennessee, we’ve been on the national news two times this week for horrific murders and mayhem. And I’m wondering what the Republicans are going to do about this. Seems to me that you guys should have a unified message to the American people. Crime, crime, crime. [00:45:20][28.8]

CONGRESSMAN SCOTT PERRY: [00:45:22] Yeah. Crime has to be punished. That is what should be and is the unifying message that crime should be punished. Crime must be punished and punishment in crime does not pay. Now, the unfortunate thing is, is that most crime is supposed to be handled at the local level. And right there in Memphis, you know, I see the outrage of Mayor Strickland. Right. He’s outraged and he’s praying for the families. Well, as the mayor and as a former city council member, instead of being outraged, why don’t you do something instead of allowing those in your party to pay for the bail of criminals to get out, they get done burning down the city instead of allowing these plea bargains where, you know, a violent felon is left out with serving less than a third of the sentence to then prey on other individuals. Why don’t you stand up before the crimes happen and do something about it instead of acting so indignant after the fact? When the whole time you’ve been part and parcel of this lawlessness that is rampaging in every city, is making every American fearful of going to urban centers, and is killing urban centers. Why don’t you actually do something so, yes, absolutely? The Republican Party and the right have a part to play here. And it’s the part we’ve always been playing Todd, is being supportive of law enforcement, of being supportive of those who follow the law, and supportive of appropriate punishments for those who violate the law and prey on innocent people in their communities. [00:46:51][89.3]

STARNES: [00:46:52] And again, you know, moving to the midterms and I know the polling data is looking pretty good and we are hoping and praying for a massive red tsunami. But I think if we’re really going to generate people coming out and voting, I think this issue, especially, Congressman, has to be front and center going after these George Soros-funded district attorneys who do not want to prosecute the criminals and are just letting them right back out on the streets again. And we need to lay this all at the feet of the Democrats because ultimately they’re responsible for this. [00:47:04][11.9]

PERRY: [00:47:27] They are completely responsible, I imagine. I don’t know because I don’t live in Memphis, but I imagine it is a wholly Democrat-run city and has been for many probably some time. Philadelphia’s the same way. I’m close to that. Baltimore is absolutely the same way. Detroit Youth, Chicago, you name it. This is a Democrat issue. It is a Democrat problem. And Joe Biden going out on TV and acting like, you know, he supports the police and that he doesn’t want to defund the police and that his vice president didn’t pay for the bail for violent felons. And they don’t support the violence that’s perpetrated by different anarchist organizations on the left. Rampaging over the country is ludicrous. And Republicans need to shout it from the mountaintops and make sure the people that are responsible for it have it. That’s where the responsibility and the accountability lie. And we want to have the peace of mind to walk out their front door or go for a jog or a walk in the park or drive their car to the gas station without fear of losing their lives or their property or their dignity. And the Democrats completely own their soft on crime. The criminals are the victim mentality. They own it completely. [00:48:42][74.7]

STARNES: [00:48:42] And this is front and center the campaign issue in the commonwealth right now. You guys are up, for example, in Philadelphia, record numbers of murders, carjackings, and armed robberies. And you’ve got a Senate candidate out there who wants to literally release a third of the criminals. He wants to abolish life in prison for murderers. This is a dangerous guy here, John Fetterman. [00:49:08][26.4]

PERRY: [00:49:08] But you’re absolutely right, Todd. And don’t forget that he wants to legalize heroin because that’s going to make the crime issue go away. Just legalize crime and then you won’t have crime. Again, a brilliant strategy. This is a person that, as far as I know, never really held any jobs. I don’t know what jobs he’s had. He lived with his parents or was supported by his parents well into his late forties, became the matter of mayor of a failed little town and which has one of the highest crime rates in the country, if not the world, and became the lieutenant governor and now thinks he should be the United States senator. Meanwhile, telling everybody wants to legalize heroin. Of course, we all know this long history of wanting to legalize the recreational use of marijuana and then on top of that release a huge amount of the prison population. So we can turn the rest of the Commonwealth of Pennsylvania into the sucking chest wound. That is, unfortunately, the once wonderful little town of Braddock, Pennsylvania. [00:50:08][59.8]

STARNES: [00:50:09] Unbelievable. And again, you know, you throw into that equation the whole stroke. And clearly, he is not medically, or physically well enough to actually run the campaign. But the Democrats. I just don’t get the strategy there as a congressman. [00:50:27][17.4]

PERRY: [00:50:28] Well, the strategy is, is that they have a vessel, much like the one that they had with the president, and of course, look, we all lament John Fetterman’s stroke. We wish him well, we wish him the best of health and we hope he has a full recovery. But being in the Senate, where you have to represent the United States of America when you’re cognitively impaired, when it would, no one wants to denigrate the fact that that happened to him. It could happen to any of us. We’re very, very sorry for that misfortune. But you have to be able to cognitively process these complex issues and then be able to articulate them. And if you can’t do that, you know, it’s not a strike against you. It’s just that there are certain jobs you shouldn’t have. And of course, that. But quite honestly, that’s almost the least of the strikes against him, just based on his background. And of course, Todd we have a gubernatorial candidate and our attorney general who’s presiding over the highest crime rates in our living history at this point, who thinks that that should afford him the top job as the administrator and the governor of our Commonwealth? He is not qualified. The left is never qualified for these things. But of course, the media, you know, most of south-central Pennsylvania, where I represent, don’t even hear anything about the absurd and obscene crime rates in Philadelphia. The fact that you are scared to go to the outskirts of Philadelphia and get a, you know, fill your car up because, you know, somebody else is going to drive off with it, after they thump you on the head with their firearm or something like that. Most Pennsylvanians don’t hear this because the media doesn’t want to report it, because it would be laid appropriately at the feet of our Senate candidate and our gubernatorial candidate on the Democrat ticket. And they just don’t want the bad news to be out there. [00:52:00][92.6]

STARNES: [00:52:08] All right, Congressman, we’re going to leave it there. Good luck. And this is a look. It’s something that’s happening in every major American city. And I think this is going to be the issue that sends people out to vote for Republicans on Election Day. Very well said, Congressman. God bless. Have a good weekend. [00:52:26][17.8]

STARNES: [00:52:29] All right. Congressman Scott Perry is chairman of the House Freedom Caucus and represents the 10th Congressional District there in the Commonwealth of Pennsylvania. And I loved how he framed it. I mean, it is a sucking chest wound. That’s what they’re dealing with. And we’re dealing with that here in Memphis, Tennessee. I mean, you can talk all you want to, but the reality is this city is just as dangerous today as it was yesterday and the day before. And I’m glad people are standing together and lighting candles and singing Kumbaya. But the reality is, we’ve got to do more than that, and we’ve got to demand more of our elected leaders, just like the people in the Commonwealth of Pennsylvania. [00:52:41][11.8]