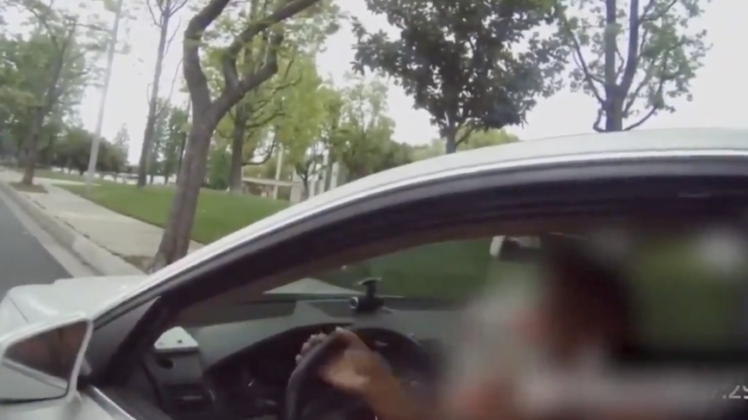 God bless this deputy sheriff in Los Angeles County. He has the patience of Job.

Journalist Bill Melugin obtained the footage of a woman claiming to be a teacher spewing racist hate at the officer for simply doing his job.

As the unidentified officer approaches the window, the driver begins recording him on her cellphone, before saying, “I started to record because you’re a murderer.”

The deputy calmly explained to the woman she “can’t be on your cellphone while you are driving” and requests to see her identification.

“It’s at my apartment, and I am perfectly legal and I am a teacher,” the driver replied and then exploded with rage.

“You are always going to be a Mexican,” she is heard saying. “You will never be White. You know that, right?”

Melugin called the exchange a “grade A example of the kind of animosity that some of the officers out there are encountering on the streets.”

“You’re always gonna be a Mexican,” the woman snarled. “You’ll never be white, you know that?”

The woman reportedly has a history of making false complaints against deputies, Melugin wrote on Twitter.

If in fact this woman is confirmed to be a school teacher she should be removed from the classroom. Such a vile anti-cop bigot has no business being around children.

NEW: "You're always gonna be a Mexican, you'll never be white, you know that?"
A Latino LASD deputy sent me his bodycam video of a woman claiming to be a teacher launching into a racist tirade against him when he pulled her over in San Dimas. She repeatedly calls him a murderer. pic.twitter.com/Cc8jSVenCQ