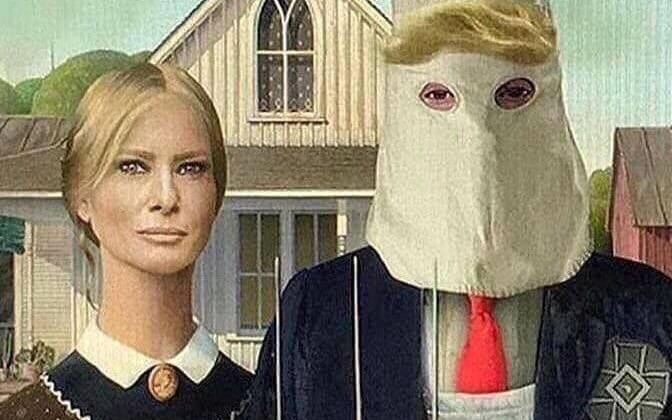 A California art teacher is in a heap of controversy after handing out an assignment with former President Trump wearing a KKK hood.

The art, which has been shared on Reddit, shows Trump and first lady Melania Trump, with exposed cleavage, in the style of Grant Wood’s “American Gothic” next to the original.

“Imagine what would have happened had the art teacher displayed a painting of former President Obama picking cotton in the Mississippi Delta,” Starnes said. “They would have burned the painting on the spot.”

Parents at the school are outraged the public school is injecting politics into the classroom.

Bridget Johnson told the local news it was shown as an example in her daughter’s art class two weeks ago. The prompt was to taken an old picture and modify it to modern times.

“I don’t care if it was Trump, which does upset me, or if it was a picture of the Obamas or the Bidens. I don’t believe that the politics belongs in an art class,” parent Jim Schultz told KOVR.

The school district told parents they can’t comment on a personal matter but don’t condone the assignment, WSET reports.