Teacher Under Fire for Question Listing Fox News, Texans, ‘All of Florida’ as ‘Complete Idiots’ 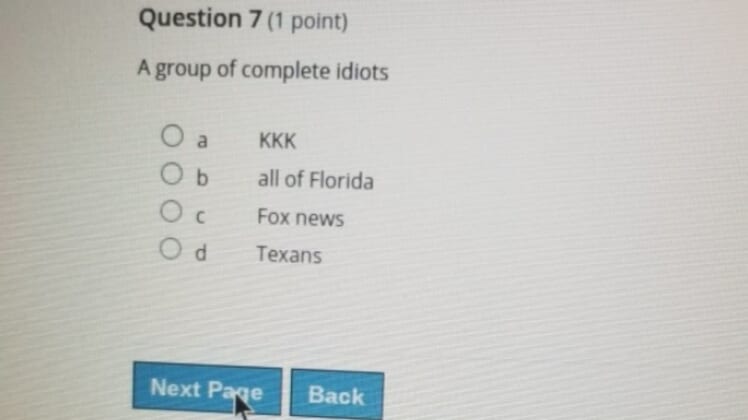 Parents are outraged after a California teacher asked high school students on Thursday to identify “a group of complete idiots” with answers like “KKK,” “Fox News,” “Texans, and “all of Florida.”

Whitney High School in Rocklin launched an investigation the following day into the social science quiz that went viral after Jessa Krissovich shared them online.

“My friends son who attends Whitney High School just took a picture of his test question in history class,” she told FOX 40, “We all have different beliefs. This is the United States and we all come from different backgrounds and everybody should be okay with who they are. These stories have gone in one ear and out the other. It sounded unbelievable.”

Joel Alquicira, a former student of the teacher, said, “I understand he’s just trying to make a joke, but that kind of stuff shouldn’t be on a test. He was always like a funny kind of teacher. He would always make jokes.”

But parents and community members aren’t laughing. Many are calling for the teacher to be fired immediately.

‘THERE HAS TO BE A RECKONING’ Tenn. Lawmaker Wages War Against Christian School for Teaching Christian Values

“Students, families and the Rocklin community have raised concern about the class assignment,” Cutts said in a letter to staff, students, and families. “The Whitney High School Administration Team and the Rocklin Unified School District recognizes and shares their concerns and is conducting a thorough investigation. Whitney High and Rocklin Unified is committed to providing each student, family, and staff with a safe and welcoming environment.”

He added: “While personnel matters will remain confidential, appropriate disciplinary steps will be taken.”