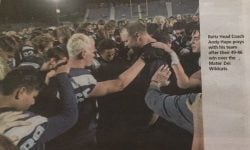 An Indiana high school football coach broke the law when he joined his team in prayer after a football game, according to a notorious gang of atheists, agnostics and free-thinkers.

Click here for a free subscription to Todd’s Newsletter: a must-read for Conservatives!

“It is illegal for public school athletic coaches to lead their teams in prayer, participate in student prayers, or to otherwise promote religion to students,” Freedom From Religion Foundation attorney Ryan Jayne wrote in a threatening letter to the Evansville Vanderburgh School Corporation.

The photograph showed the players gathered around the coach with their heads bowed. Several of the player had placed their hands on the coach’s shoulders.

PODCAST: Listen to Todd’s free podcast – one of the fastest-growing Conservative podcasts in America!

The Wisconsin-based Freedom From Religion Foundation says they were alerted to the photograph by one of their minions lurking around Evansville.

“Coach Hape’s conduct is unconstitutional because he endorses and promotes religion when acting in his official capacity as a coach of the Panthers,” attorney Jayne wrote. “When public school employees acting in their official capacities organize and advocate for team prayer, they effectively endorse religion on the District’s behalf.”

The FFRF is calling on the school district to investigate Coach Hape and take steps to prevent what they call “serious and flagrant” violations of the First Amendment.

“Staff members shall not use prayer, religious readings, or religious symbols as a devotional exercise or in an act of worship or celebration,” the policy states. “No matter how well intended, either official or unofficial sponsorship of religiously-oriented activities by the school are offensive to some and supplant activities which should be exclusive province of individual religious groups, churches, private organizations or the family.”

Supt. Dave Smith told television station WEVV they are standing alongside the coach and the players.

Jeremy Dys, an attorney with First Liberty Institute, told me what happened on that football field was perfectly legal.

“The kids have a First Amendment right to lay hands on their coach and pray for him,” Dys told me. “The government cannot stop the students’ religious expression.”

And should the school district investigation determine the coach did in fact break school policy – they could face legal action from First Liberty Institute.

“If the school district prohibits the students’ exercise of religion, we stand ready to represent these players free of charge,” Dys told me.

For a Deplorable Christmas — you need a signed copy of Todd’s best-selling new book – “The Deplorables’ Guide to Making America Great Again. Click here for a Christmas-edition of the book!