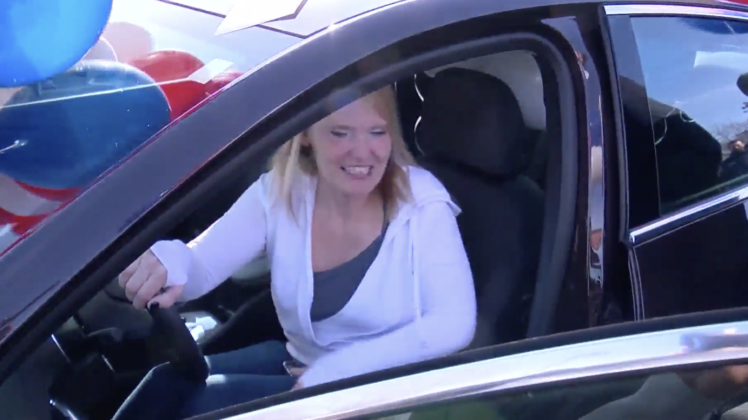 A veteran down on her luck was given a much-needed boost by the good-hearted citiznes in Anoka, Minnesota.

Navy veteran Sierra, who arrived in town with $200 and a backpack, walked out of the American Legion in Anoka to a brand new car.

WCCO captured the heartwarming surprise on video with hugs, balloons, and a whole lot of hope.

Shocked by it all, Sierra was in disbelief.

“This is real, absolutely,” someone told her.

“You guys just gave me a lot of hope,” Sierra told the crowd gathered there to show her support.

“Like, this was the last time I was going to reach out for help because I was so tired, but you guys gave me hope,” she added. “Thank you.”

Sierra is a resident at Haven for Heroes, a joint county and city non-profit that provides transitional housing to veterans in search of a better life.

Sierra is a resident at Haven for Heroes, a community effort launched by several volunteers and leaders, including MyPillow CEO Mike Lindell, based on a Bible verse from the book of Psalms.

“Then they cried to the Lord in their trouble, and He brought them out of their distresses. He caused the storm to be still, so that the waves of the sea were hushed. Then they were glad because they were quiet; so He guided them to their desired haven. Let them give thanks to the Lord for his loving kindness, and for His wonders to the sons of men!” – Psalm 107:28-31

The former military EMT plans to use the new gift to drive to job interviews and encouraged other veterans struggling to hold on and reach out for help.

The vehicle was presented to the Navy veteran by Joe and Jake Maurer of Mauer Main Chevrolet,

“People like Mauer Chevrolet and the community reacted in so many ways and this is just one example of people digging deep and deciding that veterans are important,” said Minnesota State Senator Jim Abeler.