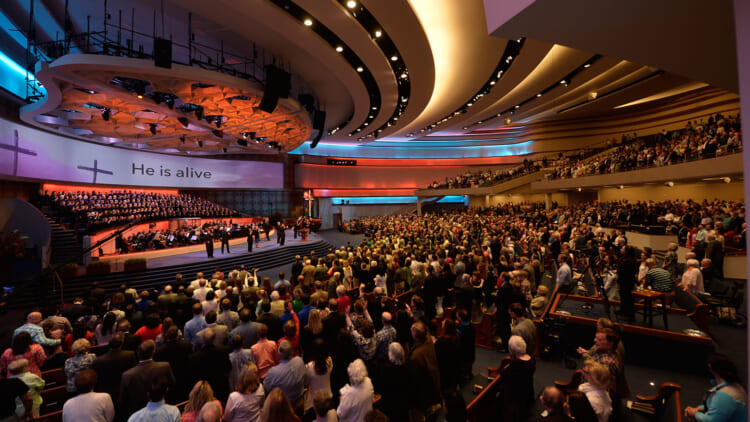 Editor’s Note: Updated with a response from the mayor’s office.

Billboards promoting a celebration of faith and freedom at the First Baptist Church in Dallas were removed after complaints from Dallas Mayor Mike Rawlings and the Dallas Morning News.

The patriotic billboard campaign included the title of the sermon Dr. Robert Jeffress planned to deliver on June 24 – “America is a Christian Nation.”

“We were told by the billboard company that the message was divisive,” Jeffress told the Todd Starnes Radio Show.

The sermon title was inspired by a comments made by Supreme Court Justices John Jay and David Josiah Brewer – both of whom described America as a Christian nation.

MAJOR SPECIAL: Click here for a signed and personalized copy of Todd’s new book – “The Deplorables’ Guide to Making America Great Again!” Fight back against the Left!

“The message will present the historical evidence for the bedrock of faith upon which America was founded,” said Jeffress.

However, the Dallas Morning News and Mayor Rawlings blasted the pastor’s sermon title suggesting it was hateful and divisive.

“That is not the Christ I follow,” the mayor told the newspaper. “It’s not the Dallas I want to be – to say things that do not unite us but divide us. I never heard those words – that voice come out of Christ. Just the opposite. I was brought up to believe: Be proud of yours, but do not diminish mine.”

Columnist Robert Wilonsky started the controversy with a scathing column on June 7 titled, “First Baptist pastor Robert Jeffress’ gospel of division does not represent my Dallas.”

Wilonsky was apparently triggered by the patriotic billboard while stuck in traffic and suffered a massive microaggression.

“My rabbi warned me there would be days like this,” he wrote. “All I saw Wednesday was someone telling me and everyone else who does not worship Jesus Christ that we do not belong here.”

The following day the church received a message from the billboard company that their signed contract was being canceled and the billboards would be taken down.

“We are getting hammered by the media for the ‘America is a Christian Nation’ tagline on the billboards,” a representative of Outfront Media wrote to a church leader. “Dallas Morning News and other news affiliates are doing stories on how it’s offensive and bigoted. Someone called our corporate office in New York about the ‘offensive’ billboards and following our lawyer’s advice, we have to take them down ASAP.”

The church offered to revise the sermon title, “Is America a Christian Nation?” but that, too, was rejected by the billboard company.

“We were told that the title was ‘anger-provoking rather than ‘thought provoking,’” the pastor told me.

The local representative was apologetic – but it was clear the New York-based company was no match for angry anti-Christian radicals.

“The reason those on the Left do not want people to hear my message is that they know the historical evidence is on my side that America was founded on the principles of the Christian faith,” Jeffress said. “We will not be deterred as we defend the foundational values of our country.”

“Mayor @Mike_Rawlings speaks for the real Dallas. The guy on the billboard does not,” he wrote.

To be clear, First Baptist Dallas has no beef with Outfront Media. They are a privately owned company and they have a right to decide who they do business with.

“We support the right of businesses to refuse service to customers based on religious conviction,” said Jeffress, who is also one of the top spiritual advisors to President Trump.

The problem, he said, is the Dallas Morning News and Mayor Rawlings.

“It should greatly concern people of any faith when those in the press or government proactively seek to defeat, censor or silence any religious message with which they disagree,” Jeffress said. “We don’t believe Dallas city officials have any right to directly or indirectly be involved in censoring a church’s message.”

The mayor denied having any involvement in having the billboards removed.

“I don’t ‘oppose’ the billboards,” the mayor told me in a written statement. “My Christian faith teaches me not to be judgmental and to love those that are different than me. I also believe that as an American I can honor my devout Christian beliefs and still respect the fact that this is a diverse world and I represent a diverse constituency. Those two thoughts can go together. I don’t believe that the billboard captured those important nuances.”

As for that bastion of free speech known as the Dallas Morning News?

“For the Dallas Morning News – who pose as champions of free speech, to try to censor our church’s message is gross hypocrisy,” the pastor said.

It turns out another billboard company offered to put up the church’s message on 20 billboards, not two.

In other words, Mr. Wilonsky might want to find another way to work – or else prepare for another traffic jam microaggression.