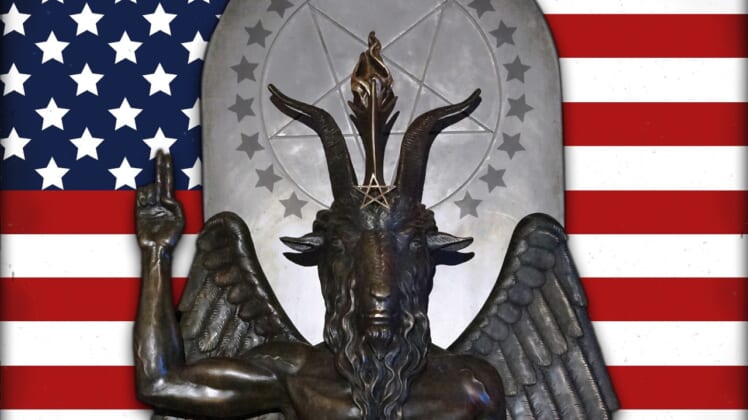 A group of devil-worshipers want to erect a satanic goat statue on the front lawn of the Arkansas State Capitol.

I wish I was kidding with you, good readers – but it’s the ugly, unvarnished truth.

The Satanic Temple plopped down a giant winged half-man, half-goat statue during a rally on the steps of the state capitol in Little Rock.

The devil worshipers say the statue is meant to protest the recently installed Ten Commandments monument.

“If you’re going to have one religious monument up then it should be open to others, and if you don’t agree with that then let’s just not have any at all,” Satanic Arkansas co-founder Ivy Forrester told CBS News.

It’s unlikely that will happen.

The Ten Commandments monument was installed because of legislation by Arkansas lawmakers and signed into law by the governor.

And the Supreme Court ruled in Pleasant Grove City v. Summum that the government may erect a Ten Commandments monument and reject the creation of a monument of a different religion without violating the Free Speech clause of the First Amendment.

Regardless, State Sen. Jason Rapert, the force behind the installation of the Ten Commandments monument, vowed to do whatever is necessary to stop the Satanists from erecting their monument.

“No matter what these extremists may claim, it will be a very cold day in hell before an offensive statue will be forced upon us to be permanently erected on the grounds of the Arkansas State Capitol,” he wrote on Facebook.

Well, that oughta get the devil worshipers’ goat.