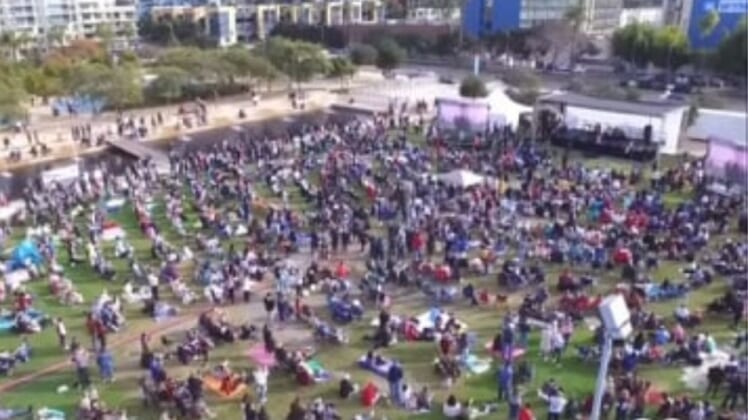 More than 1,000 people marched at the “Freedom Revival” over the weekend in San Diego, California.

The event was held to promote “courage and faith over fear” and seek “spiritual awakening,” according to organizers.

With worship, preaching, and speaking at the rally they stood up for freedom against vaccine and mask mandates days before President Biden’s mandates for private businesses and healthcare workers were set to go into effect as the nation awaits two Supreme Court rulings.

“We met so many individuals days away from termination of their jobs due to the illegal mandates. Yet they came and gave their time, donated their services and walked away full of hope,” the group shared on Facebook. “We are eager to hear the many stories of what our amazing God did in the hearts of those who trust him.”

Joanne Michelson told KUSI that many people are “worried about losing their job or worried about their child getting a shot to go to school.”

Jim Michelson added: “Everyone’s waking up. This has gone too far and we want to change course.”

The mission of Freedom Revival is three-fold: Rise. Restore. Reclaim.

“As a nation living in unchartered territory, knocked down in fear: United we will rise together, stronger than before.

As a nation divided by lies, deceivers took control: United we will restore our families, communities and counties.

As a nation ruled by a few, we gave away our power and liberties: United we will reclaim our authority.”