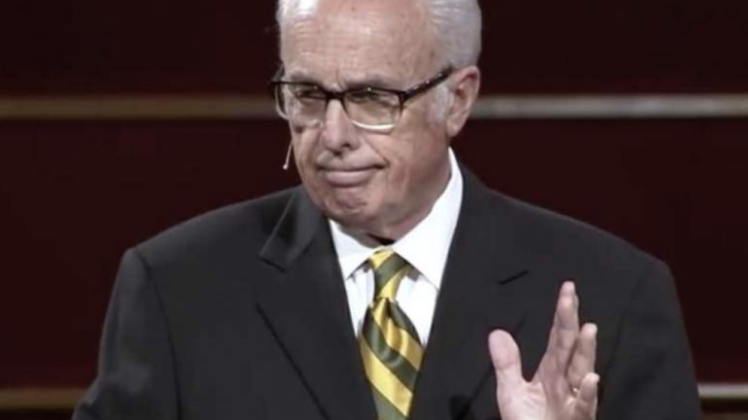 The church is accused of not having proper signage at the front doors of the sanctuary, according to an official inspect report obtained by the Todd Starnes Radio Show.

The church’s sign read, “Please do not enter if you have an elevated temperature, a cough, or any flu-like symptoms.”

However, the county inspector said the signs should have been placed at the front and back entrances of the building.

The county also said the signs should have instructed people to wash hands or use sanitizer, to wear face coverings and to maintain social distancing.

Because they failed to do so – the church will be forced to pay the county $1,000.

Los Angeles County is trying every angle to harass and bully Pastor John MacArthur and the congregation of Grace Community Church. This is the type of bigotry and discrimination I warned about in my new book, “Culture Jihad: How to Stop the Left From Killing a Nation. Click here to read.

The well-known evangelical megachurch has been holding indoor worship services as commanded by Holy Scriptures, in defiance of edicts handed down by Gov. Gavin Newsom.

Grace Community filed a lawsuit alleging the governor’s actions are unconstitutional. A judge gave the church permission to continue in-person worship while the case is being adjudicated.

Most recently, the city announced plans to evict the church from a parking lot they had been leasing for more than 40 years.

“At the time of investigation we were refused entry onto church grounds in order to observe the implementation of the health officer orders and the protocol for places of worship,” the inspection report noted.

Make no mistake. this is an abusive, overt attempt to shut down the church.

But Pastor MacArthur is a man who humbly stands on the Word of God. He will not be bullied. He will not be intimidated – no matter what the godless government in Los Angeles ultimately decides to do.

Christians around the nation should lift this church up in prayer. And Christians in California should make a very public statement and demonstration that religious intolerance will not be tolerated in the Golden State.

And I would urge all of our readers to call the Los Angeles County Department of Public Health and let them know that you will not tolerate such behavior on American soil.