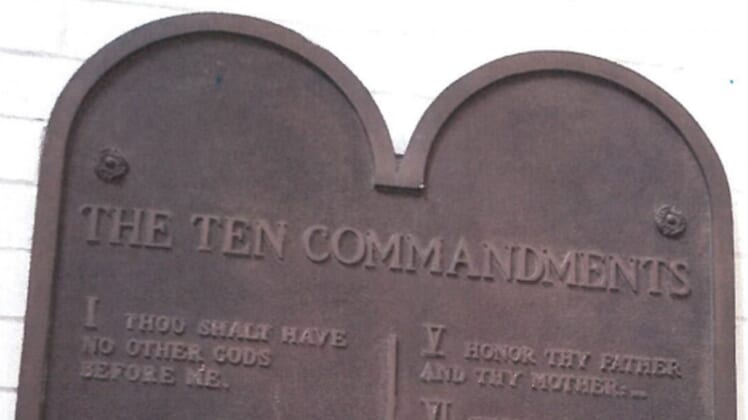 The Freedom From Religion Foundation, a militant group of agnostics, atheists and free-thinkers, found itself a new target: a middle school in Ohio.

The notoriously intolerant foundation’s latest target is a 96-year-old display of the Ten Commandments at Joseph Welt Middle School in New Philadelphia.

You really wonder how much work the employees of the Wisconsin-based foundation really have if they’re focused on tiny plaques at middle schools in suburban Ohio.

Fox News journalist Caleb Parke reported that the plaque was a gift of the Joseph Welty Middle School class of 1926 and had been displayed ever since.

That was until the school took it down following the FFRF’s bullying.

The plaque, the foundation claimed, was a “flagrant violation” of the First Amendment. Apparently displaying moral commands that include “thou shalt not kill” is a blatant violation of the separation of church and state.

Parke reported that the FFRF’s Christopher Line wrote a letter to the school in April that said “the district’s promotion of the Judeo-Christian bible and religion over non-religion impermissibly turns any non-Christian or non-believing student into an outsider.”

Line said that the children at the school “feel significant pressure to conform to their peers” and “they must not be subjected to similar pressure from their schools, especially on religious questions.”

After the school took down the plaque, the foundation declared victory, stating emphatically “in America, we live under the First Amendment, not the Ten Commandments.”

It’s worth asking if “thou shalt not steal” is something the perpetually offended atheist group thinks is a bad command.

The superintendent of the New Philadelphia schools David Brand said that he plans to challenge the decision of the school and the plaque “is recognized as part of the tradition and history of New Philadelphia City Schools.”

“Rather than engaging [the foundation] in an action where the community’s resources are at stake,” he said. “The district will consider filing an amicus brief in a forthcoming case on the matter.”